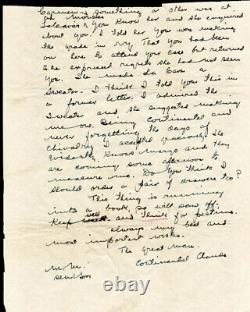 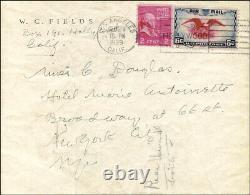 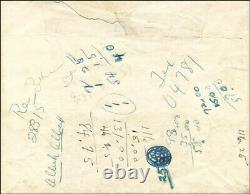 Make an Offer Today and Get a Quick Response! Take a Look at This Week's Specials!

No place, no date, but with original envelope postmarked Los Angeles, Hollywood, December 27, 1939. Addressed by Fields to Miss C. Douglas [Carlotta Monti], Hotel Marie Antoinette, Broadway at 66 St. Unrelated notes on verso (unknown hand). In full: Something or other was at ah La Cava's Morales you know her and she enquired about you.

I told her you were making the grade in N. She expressed regrets she had not seen you. She made La Cava a sweater.

I think I admired the sweater and she suggested making me one. Being continental and never forgetting the days of chivalry I accepted graciously. She evidently knows Margo and they are coming some afternoon to measure me. Do you think I should order a pair if drawers too?

This thing is running into a book, so will saw off. Keep well- and think for pastime. Always my best and most important wishes. Creased, folds, lightly nicked edges.

He was a vaudeville headliner before he was twenty and toured Europe in 1901, giving a command performance at Buckingham Palace. Fields starred in Poppy on Broadway (1923) and the next year made his first film, Janice Meredith (1924). Fields' style, verbal rather than visual, and irascible con-man philosophy made him a favorite, especially with the advent of sound, where his raspy voice provided the final touch to his comedy. He starred in movies including My Little Chickadee (1940) and Never Give a Sucker an Even Break (1941). Fields' mistress from 1932 until his death was starlet Carlotta Monti, who often performed under the name of Carlotta Douglas, as shown here. Fields and Me, was the basis for the 1976 film. Fields was never divorced from his wife, Harriet "Hattie" Hughes, though they were permanently separated in 1904. Consequently, Monti was passed over in the settlement of Fields' estate. Fields often referred to himself ironically as "The Great Man", and his character is called that in a later film, Never Give a Sucker an Even Break (1941). See more material from these signers. See more listings in our ACTORS & ACTRESSES (11,359). Please note that this is an authentically signed item. We do not sell autograph copies or signature reprints. Images shown may contain our company watermark. The actual document does not contain this watermark. This item has been authenticated and is accompanied by a Certificate of Authenticity issued by our parent company, Gallery of History, Inc.

We financially stand behind our COA. Ask us about our PSA/DNA and JSA authentication guarantee.

Gallery of History is the world's largest dealer of authentic autographs and manuscripts. Our inventory contains documents in all areas of interest including presidents, royalty, military, aviation, religion, business, science, celebrities, sports, music, authors and more. Whether looking to add to your collection, acquire a unique centerpiece for the home or office, or as a truly one-of-a-kind gift for someone special, you'll find it here at HistoryForSale. Founded in 1981, is a long-standing UACC Registered Dealer, #RD110, and is a long-standing member of the Manuscript Society.

The Gallery of History is the largest dealer in the world with an available inventory that exceeds 230,000 rare autographs and manuscripts. Preserving historical documents is important to us. Our unframed items are sent to you either in acid-free archival sleeves or have been encapsulated when noted. The majority of our in-house framed items are encapsulated in acid free sleeves to guard against organic acids, mounted in an acid-free enviroment and are framed behind glass or UF3-AR Plexiglas which blocks out most ultraviolet light. We warrant to the original purchaser for a period of ten (10) years from the date of the sale the authenticity of any autograph offered by HistoryForSale.

Gallery of History is not liable for any other damages, including consequential damages. There are no other warranties of any nature either expressed or implied, including but not limited to the warranties of merchantability and fitness for a particular purpose. This item is in the category "Collectibles\Autographs\Movies". The seller is "historydirect" and is located in this country: US. This item can be shipped worldwide.