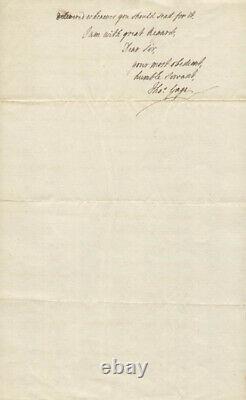 In full: I have received your letters of the 24 th, 26 th Dec. The opinion you give of the general causes of the discontent of the savages, which originate from our growing power and their jealousy of our designs against them, I know no remedy against, but by doing them all the justice we can. If we can remove the settlers from their encroachments it will be a manifestation of our earnest desire to do them justice. And they have seen a person executed in New Jersey for the murther of an Indian, which must in some measure shew them we do what we can to give them satisfaction for the murter of their peoples, which tho only one example, is more than they have given us for the many white people they have killed at different times. If the Indians and patentees of Kagadorosseras come to a serious agreement to mutual satisfaction, I should think it no difficult matter to get an act of assembly to validate the releases and make them sufficient to bar all future pretentions. [George] Croghan will acquaint you of his proceedings in the Detroit and Fort Pitt &c and of the circumstances of the murther of the people upon the Ohio by the Indians of Saguinam. It's to be hoped that Lieut. Governor Fauquiere will grant the meeting desired by the Shawnese and Delawares and give them all the satisfaction in his power. I shall grant a temporary warrant immediately on Mr. The Cherokees are with you at an unlucky season of the year but if we can't make peace for ourselves, I don't see how we are to succeed for them. It seems determined by the last packet to erect governments in the interior country I suppose at the Detroit and the Illinois, where else I can't guess unless Fort Pitt. In which shape this is to be done or what attempts of this nature are made. There are fifteen barrels of pork, and 24 of flower [sic] lying at Albany for your use and ordered to be delivered whenever you should sent for it. From 1766 to 1775, he was commander in chief of British forces in North America.

In 1774 he was appointed concurrently as military governor of Massachusetts, where he was accused by some other British officials of showing too much leniency to the rebellious colonists. His dispatch of troops to seize military stores, however, triggered the battles of Lexington and Concord, and following the Battle of Bunker Hill he was recalled to England. Gage's assessment in this letter was quite accurate. Following the end of the French and Indian War, the Iroquois and other tribes in the trans-Appalachian West were no longer able to play the French against the British in order to preserve their territorial integrity.

That realization helped prompt Pontiac's Rebellion in 1763. The Royal Proclamation Line of 1763 set the boundary between British colonial settlements and Indian territory, much to the chagrin of land-hungry colonists who were already penetrating the trans-Appalachian West. Johnson commanded Iroquois and colonial troops during the French and Indian War, and served as Superintendent of Indian Affairs from 1756 until his death. A revised Proclamation Line limiting colonial westward settlement did little to ease the pressure of white settlers continuing to encroach on Indian lands and became a principal complaint by those rebelled against British rule in 1775.

Very minor foxing on page 1. Soiled at folds on verso.

See more material from these signers. See more listings in our MILITARY (2,446). Please note that this is an authentically signed item. We do not sell autograph copies or signature reprints.

Images shown may contain our company watermark. The actual document does not contain this watermark.

This item has been authenticated and is accompanied by a Certificate of Authenticity issued by our parent company, Gallery of History, Inc. We financially stand behind our COA. Ask us about our PSA/DNA and JSA authentication guarantee.

Gallery of History is the world's largest dealer of authentic autographs and manuscripts. Our inventory contains documents in all areas of interest including presidents, royalty, military, aviation, religion, business, science, celebrities, sports, music, authors and more. Whether looking to add to your collection, acquire a unique centerpiece for the home or office, or as a truly one-of-a-kind gift for someone special, you'll find it here at HistoryForSale.

Founded in 1981, is a long-standing UACC Registered Dealer, #RD110, and is a long-standing member of the Manuscript Society. The Gallery of History is the largest dealer in the world with an available inventory that exceeds 230,000 rare autographs and manuscripts. Preserving historical documents is important to us.

Our unframed items are sent to you either in acid-free archival sleeves or have been encapsulated when noted. The majority of our in-house framed items are encapsulated in acid free sleeves to guard against organic acids, mounted in an acid-free enviroment and are framed behind glass or UF3-AR Plexiglas which blocks out most ultraviolet light. We warrant to the original purchaser for a period of ten (10) years from the date of the sale the authenticity of any autograph offered by HistoryForSale. Gallery of History is not liable for any other damages, including consequential damages. There are no other warranties of any nature either expressed or implied, including but not limited to the warranties of merchantability and fitness for a particular purpose. This item is in the category "Collectibles\Autographs\Historical". The seller is "historydirect" and is located in this country: US. This item can be shipped worldwide.