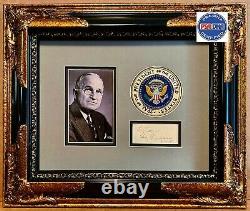 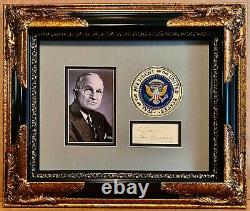 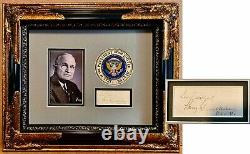 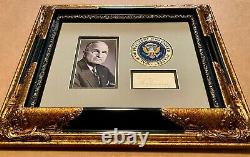 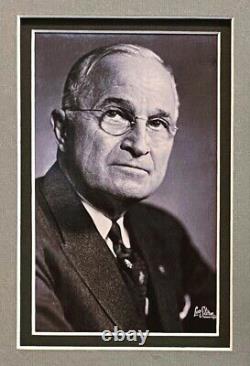 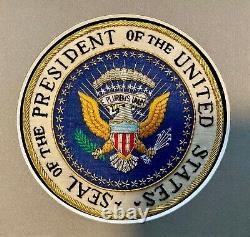 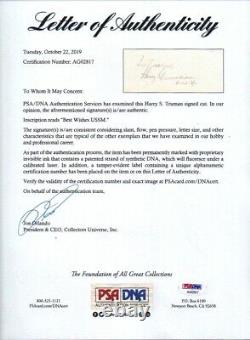 33rd President of the United States of America. Don't like my prices... This is a beautiful autographed photo display featuring the 33rd President of the United States, Harry S. Harry Truman was president of the United States from 1945 to 1953, succeeding upon the death of Franklin D. Roosevelt after serving as vice president. He implemented the Marshall Plan to rebuild the economy of Western Europe, and established the Truman Doctrine and NATO. Below and right of the photo is a signed cut/card bearing the. Vintage autograph of President Truman, dating to approximately August 1944. See date shown in above photo/scan on the reverse of the card. (reverse of card is no longer visible due to framing) President Truman's signature is in steel tip fountain pen and has held up extremely well over the years. The signature and inscription reads: "Best Wishes, Harry Truman USSM". A very nice example of an early autograph. The signature card was recently removed and the autograph authenticated. The autograph is now unconditionally guaranteed authentic for life by PSA/DNA Authentication Services Inc. The full letter of authenticity is included with the piece. Please see scan of the letter. The card has been very carefully replaced and the entire piece resealed under a new dust cover. Above the signature is a gold and silver bullion, fully embroidered 3D patch of the Presidential Seal of the United States. Absolutely stunning and beautiful patch! FACT: He is the ONLY PRESIDENT to leave office with a NET WORTH of LESS than when he entered it.

FACT: The ONLY conversation Truman ever had with Roosevelt was when Truman had a cup of coffee with FDR during the campaign of 1944 for a mere photo op that lasted less than ten minutes. Once the photos were taken FDR and his people left the room. FACT: FDR NEVER discussed the Atomic Bomb with Truman. FACT: Truman hadn't ever heard of the Atomic Bomb until his first day as President. Upon his discussion with the Joint Chiefs of Staff on that First Day, He ended the meeting by giving the order that the Bomb was to be dropped as soon as it was ready.

Truman wanted the War ended ASAP and the soldiers brought home. He fully understood first hand the true hell that war is. All framing materials for this piece are of acid free, archival, museum quality mounted under 99% UV glass.

The frame is of beautiful ornate art deco styling with the total piece measuring approximately 16.25" X 19.25". The verso, dust covered, with wire attachment, is ready to hang and enjoy. Frame has a few small chips around the edge.

Truman autographed piece, with authenticated vintage signature, it just doesn't get much better than this! All photos were taken without the glass in place to avoid glare/reflection from flash.

This was before the display was fully reassembled after PSA/DNA authentication. Please also make the determination of authenticity for yourself by examining the photo/signature. APIC Member In Good Standing. We will entertain all reasonable offers on this item.

Most of our items are high end collectibles, for this reason we entertain only serious offers. We thank you for understanding.

Please Do Not Copy Without Permission. This item is in the category "Collectibles\Autographs\Political\Presidential". The seller is "american-authentics" and is located in this country: US.

This item can be shipped to United States, Canada.