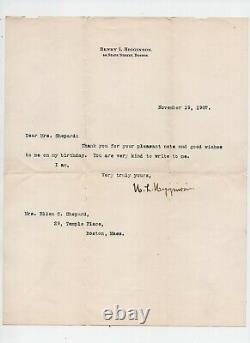 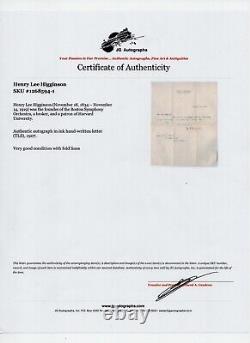 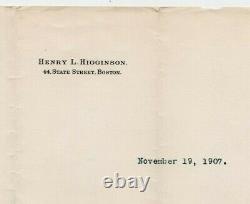 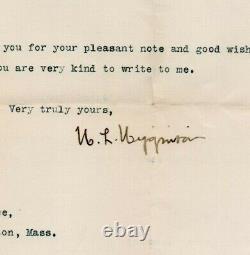 This is a letter from Henry Lee Higginson. Officer who is best remembered for being the. Founder of the Boston Symphony Orchestra. Higginson entered the Union Army in 1861, as second lieutenant of Company D in the 2nd Massachusetts Regiment, and fought at the First Battle of Bull Run. In 1863, in the Battle of Aldie, Higginson was knocked from his saddle and received several serious wounds. While recovering in Boston he married Ida Agassiz, daughter of the famous Harvard scientist Louis Agassiz. Higginson retired from the military as a colonel. After the war, Higginson became a successful. Businessman in the Boston investment bank. Of Lee, Higginson, & Co. Founded the Boston Symphony Orchestra. With the aim of making it the musical equal.

Of the great European orchestras, while also. Ran the business side of the orchestra until.

1918, and was also responsible for choosing. The conductors during this time. Years he personally made up the annual. Budget deficit with his own funds. The letter is typed on a 10.5" by 8.5" sheet of Higginson's stationery, with his name and address (44 State Street, Boston) printed at the top.

The letter is dated November19, 1907, and is signed in ink by as H. The letter is addressed to Ellen C. Shepard, whose address was 29 emple Place, Boston. The letter is in good condition, with creases.

Where it has been folded, and moderate wear. Comes with a certificate of authenticity. Plastic page, which is open at the top. Easy access to the letter, while keeping it protected. This item is in the category "Collectibles\Autographs\Historical". The seller is "logic_of_liberty" and is located in this country: US.