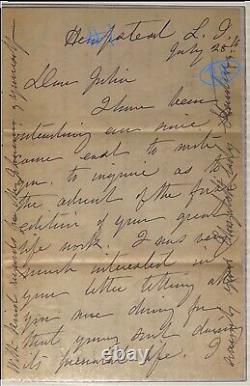 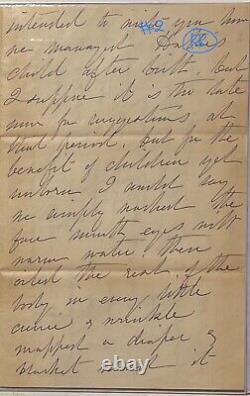 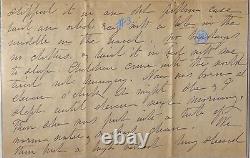 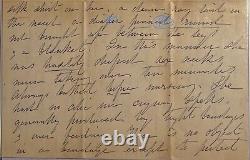 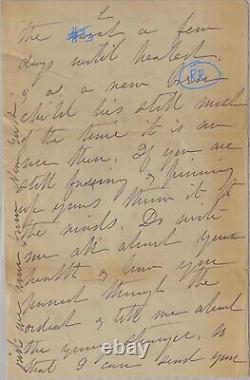 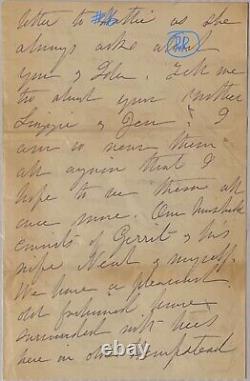 Interesting and unique signed 4 page (2 sheets on both sides) holograph letter from 73 year old Elizabeth Cady Stanton to a much younger family friend, who in her early years lived near the Stanton home in Tenafly, N. And grew up with the Stanton children - on the occasion of the birth of that friend's first child. The letter both begins ["Dear Julia"] and ends With kind regards for Mr. Johnson and yourself, sincerely yours Elizabeth Cady Stanton on the same half of one of the sheets of paper, shown in the main photo. The letter is written on 2 unequal size sheets of paper, with the writing on the larger sheet divided into two halves, with each half-side written at right angles to each other. In order to display the letter oriented so that it is easier to read, the first 4 photos show only one-half of one side of the larger sheet of paper. Photos 5 and 6 show the entirety of each side of the smaller sheet. Doing a search online for Julia [née England] Johnson and Elizabeth Cady Stanton results in a citation concerning an August 1888 lunch they had together in Buffalo, NY, along with Stanton's daughter Margaret, and recorded in Volume 5 of. THE SELECTED PAPERS OF ELIZABETH CADY STANTON AND SUSAN B. ANTHONY: THEIR PLACE INSIDE THE BODY-POLITIC, 1887 to 1895 [Rutgers University Press]. Left Mrs Greens at 8.30-reached Bu? Alo 11.45- lunched with Julia England Johnson 1-Maggie Stanton there- at 2 went on to Jamestown-arrived 6.30-& were met by Mrs Henderson 2 & escorted to the palatial home of Mrs Reuben E. Fenton- 3 she has two splendid daughters, Mrs Gilbert & Mrs Gi? From Byron to Jamestown in Chautauqua County, they continued west by rail to Bu? , a daughter of the late Isaac W. England of the New York Sun, grew up with the Stanton children in Tena? The given name of her husband Mr. Federal Census, 1880; Eighty Years, 322-23; Papers, 3:256, 259. Needless to say, one can confidently infer that Mrs. Were well acquainted with each other. Stanton's daughter Harriot, born in 1856, [approximately the same age as Julia England], is apparently referenced in the letter in the line. Letters in which she refers to her daughters Harriot and Margaret as "Hattie" and "Maggie". The 1883 birth of Nora Harriot's daughter / E. S granddaughter is recounted briefly, to support Stanton's general advice about the needs and care of newborn children [and their mothers]. The contents of the letter consists almost entirely of Stanton's congratulatory comments, and her advice on caring for a newborn, based on her own experience as a mother and grandmother, which is referenced and recounted in brief. The large majority of E. Highly personal letters such as this one are very rare indeed. [1889] and written from Hempstead, Long Island, where E. Spent the summer of 1889 with her son Gerrit and his wife. The smaller of the 2 sheets [the last 2 photos] has a tear that has been repaired on one side with pH neutral archival quality document repair tape. This letter was found, by chance, in an unmarked envelope pasted into an elaborate, partially disbound, "baby's book" - a kind of "scrap book", begun soon before or just after Julia Johnson gave birth, and then assembled by her over time, and intermittently continued until her son's 5th birthday. Letter, and is interested in the baby's book, photos can be provided, but the baby's book is not a part of this listing.

Ideally of course, the letter and the baby's book should be kept together. The section below was copied from an E. Journal entry found online, which gives additional context to Stanton's life during the time she wrote this letter.

Owing to the illness of my son-in-law, Frank E. We found Hempstead a quiet, old Dutch town, undisturbed by progressive ideas. Here I made the acquaintance of Chauncey C. Parsons and wife, formerly of Boston, who were liberal in their ideas on most questions. Parsons and I attended one of the Seidl club meetings at Coney Island, where Seidl was then giving some popular concerts.

The club was composed of two hundred women, to whom I spoke for an hour in the dining room of the hotel. With the magnificent ocean views, the grand concerts, and the beautiful women, I passed two very charming days by the seaside. My son Henry had given me a phaeton, low and easy as a cradle, and I enjoyed many drives about Long Island.

We went to [William Cullen] Bryant's home on the north side, several times, and in imagination I saw the old poet in the various shady nooks, inditing his lines of love and praise of nature in all her varying moods. Walking among the many colored, rustling leaves in the dark days of November, I could easily enter into his thought as he penned these lines.

'The melancholy days are come, the saddest of the year, Of wailing winds, and naked woods, and meadows brown and sear, Heaped in the hollows of the grove, the autumn leaves lie dead; They rustle to the eddying gust, and to the rabbit's tread. The letter will be very protectively packed, which will take some extra time. Of course, the letter is quite fragile - handle with care.

It would be very ill advised to remove the letter from its clear acetate sleeve if one intends to return it, or without a plan to more permanently protect and preserve it. I will attempt to answer any questions. This item is in the category "Collectibles\Autographs\Historical". The seller is "remarkable_recoveries" and is located in this country: US.