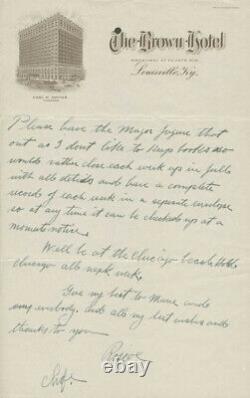 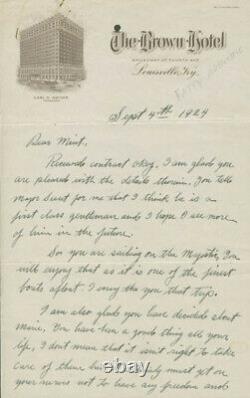 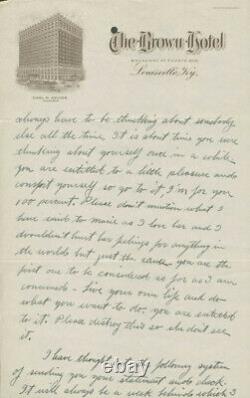 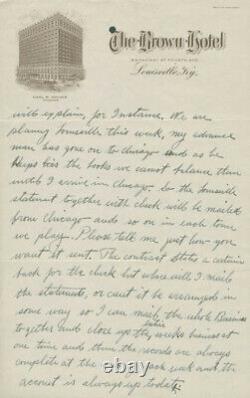 Make an Offer Today and Get a Quick Response! Take a Look at This Week's Specials! ROSCOE "FATTY" ARBUCKLE - AUTOGRAPH LETTER SIGNED 09/24/1924 - HFSID 274951. Arbuckle writes to his estranged wife, who had defended him during his scandalous trials. On letterhead of The Brown Hotel. His first wife, Minta Durfee Arbuckle. You tell Major Sweet for me that I think he is a first class gentleman and I hope I see more of him in the future.

So you are sailing on the Majestic. That as it is one of the finest. I envy you that trip.

You have been a good thing all your life. I don't mean that it isn't right to take care of them but it certainly must get on your nerves not to have any freedom and always have to be thinking about somebody else all the time. It is about time you were thinking about yourself once in a while.

You are entitled to a little pleasure and comfort yourself so go to it. I'm for you 100 percent. Live your own life and do what you want to do.

You are entitled to it. Please destroy this so she don't. I have thought out the following system of sending you your statement and check. It will always be a week behind which I will explain, for instance.

We are playing Louisville this week. My advance man has gone on to Chicago and as he keeps. The books we cannot balance them until I arrive in Chicago. So the Louisville statement together with check will be mailed from Chicago and so in each town we play.

Please tell me just how you want it sent. Please have the Major figure out as I don't like to keep books so would rather close each week up infull with all details and have a complete record of each week in a separate envelope so at any time it can be checked up at a moment's notice. We'll be at the Chicago Beach Hotel, Chicago all next week.

Give my best to Marie and everybody and all my best wishes and thanks to you. Rusty paperclip impression on first page, binder hole at top, light folds.

Three-fourths-inch tear at left of upper edge. Binder hole in printed return address. Joining Mack Sennett's Keystone Kops in 1913. Wrote and directed many of his own films.

As well as some of the other stars of comedy. In 1921, at the peak of success after signing a huge contract with Paramount Pictures, Arbuckle's career was ruined by a sexual assault scandal. After three trials, two hung juries, and an acquittal, Arbuckle was found innocent but public opinion forced Arbuckle's retirement from the screen. He made a brief comeback under the alias. He signed a six-film contract with Warner Bros.

In 1932 and a feature film contract in 1933, he passed away. She soon found roles in many of her husband's comedies, but also in the films of Charlie Chaplin and others. The couple separated in 1918, but Minta defended her husband's innocence in the court of public opinion during his three trials.

The couple divorced in 1925, an event for which Arbuckle seems to be preparing with the financial arrangements he outlines in this letter. Minta Durfee Arbuckle appeared in film supporting roles for many years thereafter, her last one being. Although blacklisted from movie screens for several years, Arbuckle did carry on as an entertainer.

See more material from these signers. See more listings in our ACTORS & ACTRESSES (11,373). Please note that this is an authentically signed item.

Take a look at over. Other listings in these categories. And This Week's Specials. Gallery of History is the world's largest dealer of authentic autographs and manuscripts.

Our inventory contains documents in all areas of interest including presidents, royalty, military, aviation, religion, business, science, celebrities, sports, music, authors and more. Whether looking to add to your collection, acquire a unique centerpiece for the home or office, or as a truly one-of-a-kind gift for someone special, you'll find it here at HistoryForSale.

Founded in 1981, is a long-standing UACC Registered Dealer, #RD110, and is a long-standing member of the Manuscript Society. The Gallery of History is the largest dealer in the world with an available inventory that exceeds 230,000 rare autographs and manuscripts. Preserving historical documents is important to us. Our unframed items are sent to you either in acid-free archival sleeves or have been encapsulated when noted.

The majority of our in-house framed items are encapsulated in acid free sleeves to guard against organic acids, mounted in an acid-free enviroment and are framed behind glass or UF3-AR Plexiglas which blocks out most ultraviolet light. We warrant to the original purchaser for a period of ten (10) years from the date of the sale the authenticity of any autograph offered by HistoryForSale. Gallery of History is not liable for any other damages, including consequential damages.

There are no other warranties of any nature either expressed or implied, including but not limited to the warranties of merchantability and fitness for a particular purpose. This item is in the category "Collectibles\Autographs\Historical". The seller is "historydirect" and is located in this country: US. This item can be shipped worldwide.