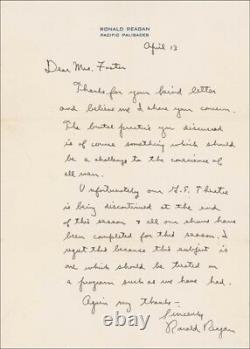 Make an Offer Today and Get a Quick Response! Take a Look at This Week's Specials! PRESIDENT RONALD REAGAN - AUTOGRAPH LETTER SIGNED 04/13 - HFSID 280275.

RONALD REAGAN Actor Ronald Reagan wrote this letter on his personalized stationery in 1962, saying that "The brutal practice you discussed is of course something which should be a challenge to the conscience of all men". He also mentions the end of General Electric Theatre, a TV show on which he appeared 70 times between 1954 and 1962.

Accompanied by original mailing envelope. Autograph letter signed: "Ronald Reagan", 1p, 7¼x10¼, on Reagan's personalized stationery. In full: Thanks for your kind letter and believe me I share your concern. The brutal practice you discussed is of course something which should be a challenge to the conscience of all men. Theatre is being discontinued at the end of this season & all our shows have been completed for this season. I regret this because this subject is one which should be treated on a program such as we have had. Again my thanks - Sincerely, Lightly toned, stained and creased. Folded once horizontally and twice vertically.

Elected Governor of California in 1966, he was reelected in 1970. Reagan began his campaign for the presidency and narrowly lost the 1976 Republican nomination to Gerald Ford. He was elected President in 1980 and was reelected in 1984.

After leaving office in 1989, he wrote his second autobiography, An American Life. On February 6, 2001, Reagan became just the third U. President to reach the age of 90 and the nation's longest living President until Gerald Ford d.

Please note that this is an authentically signed item. We do not sell autograph copies or signature reprints.

Images shown may contain our company watermark. The actual document does not contain this watermark. This item has been authenticated and is accompanied by a Certificate of Authenticity issued by our parent company, Gallery of History, Inc. We financially stand behind our COA. Ask us about our PSA/DNA and JSA authentication guarantee. Our Third & Best Handbook - The One You Want On Historical Documents! For the experienced and novice collector and for those who just love learning history this beautiful 253-page hardcover volume is for you! Take a look at over. Other listings in these categories. And This Week's Specials. Gallery of History is the world's largest dealer of authentic autographs and manuscripts. Our inventory contains documents in all areas of interest including presidents, royalty, military, aviation, religion, business, science, celebrities, sports, music, authors and more. Whether looking to add to your collection, acquire a unique centerpiece for the home or office, or as a truly one-of-a-kind gift for someone special, you'll find it here at HistoryForSale. Founded in 1981, is a long-standing UACC Registered Dealer, #RD110, and is a long-standing member of the Manuscript Society.

We warrant to the original purchaser for a period of ten (10) years from the date of the sale the authenticity of any autograph offered by HistoryForSale. Gallery of History is not liable for any other damages, including consequential damages.

There are no other warranties of any nature either expressed or implied, including but not limited to the warranties of merchantability and fitness for a particular purpose. This item is in the category "Collectibles\Autographs\Political\Presidential".