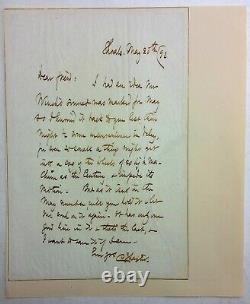 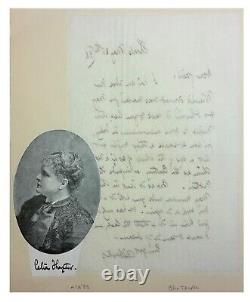 Sent from [Isles of] Shoals in May 1892 with interesting literary content. Addressed to "Dear friend" likely Richard Watson Gilder, editor of. Thaxter writes that she expected Mr. Winch's Sonnet to be in the May number of.

And, as it didn't appear, asked for it back for further revision: It has only one good line in it + that's the last, + I want to have it if I can. The finished poem appeared in the July 1892 issue p. It was written in appreciation of [William] J. Winch, a tenor who was part of a musical performing family from Boston.

Reproduction photo of Thaxter with facsimile signature is neatly affixed to the verso with small pencil notations by a collector. Fine with one light crease, mailing folds. See our other listings for an autograph card signed by Thaxter. Celia Thaxter was one of the most popular New England poets of the latter 19th century.

She spent much of her life on the isolated Isles of Shoals off the coast of New Hampshire. Her father operated a resort hotel on Appledore Island, where she cultivated her celebrated garden and established a summer salon of fellow artists and authors. Her literary circle included Hawthorne, Emerson, Longfellow, and Holmes, and among her close friends were Sarah Orne Jewett, Annie Fields, and the artists Childe Hassam and William Morris Hunt.

Along with her poetry, Thaxter is best remembered for her autobiographical works. Among the Isles of Shoals. This item is in the category "Collectibles\Autographs\Historical". The seller is "lux-libri" and is located in this country: US. This item can be shipped to United States.