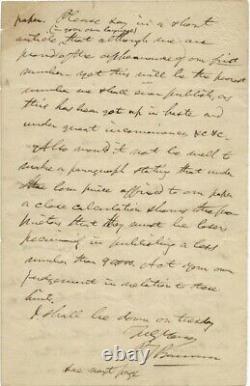 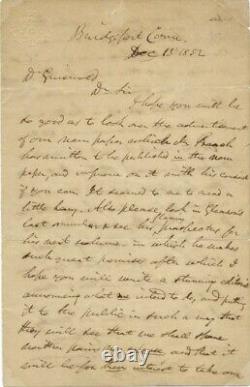 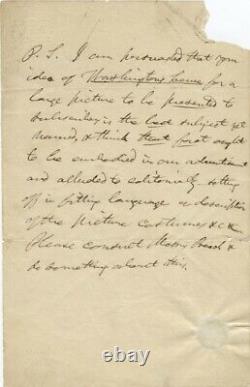 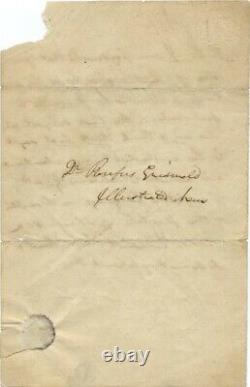 Make an Offer Today and Get a Quick Response! Take a Look at This Week's Specials!

BARNUM - AUTOGRAPH LETTER SIGNED 12/13/1852 - HFSID 84747. BARNUM The circus showman writes to Rufus Griswold at Illustrated News, asking him to write an article in praise of his new paper Autograph letter signed: " Truly Yours/P T Barnum ", 3p, 4½x7¼. Bridgeport, Connecticut, 1852 December 13. Addressed by Barnum on verso of integral leaf to: Dr. In full: I hope you will be so good as to look over the advertisement of our new paper which [name illegible] has written to be published in the new paper, and improve on it with his consent if you can.

It seemed to me to read a little heavy. Also please look in Gleadon's last number & see his flaming [illegible] for his next volume - in which he makes such great promises, after which I hope you will write a stunning editorial announcing what we intend to do, and putting it to the public in such a way that they will see that we shall spare neither pains nor expense, and that it will be for their interest to take our paper. Please say in a short article (in your own language) that although we are proud of the appearance of our first number - yet this will be the poorest number we shall ever publish, as this has been got up in haste and under great inconvenience, &c &c. Also would it not be well to [illegible] a paragraph stating that under the law piece affixed to our paper a close calculation shows the proprietors that they must be losers [illegible] in publishing a less number than 90,000.

Act your own judgement (sic) in relation to these hints. I shall be down on tuesday (sic). " At lower margin, Barnum has written: " See next page. Lengthy handwritten postscript on next page, in full: P. Please consult [name illegible] & do something about this.

He had previously been editor of the Danbury, Connecticut "Herald of Freedom", during which time he was sued for libel and jailed for 60 days. Barnum would later use newspaper advertising (as well as posters and flyers) to promote his various enterprises, including his circus and, as evidenced by this letter, his own illustrated newspaper. Barnum retired in 1855 but, because of creditors, resumed his career as showman and museum proprietor in 1857.

In 1869, Barnum organized a circus that he billed as "The Greatest Show on Earth". In 1881, he became partners with James A. Bailey of Cooper, Bailey and Company's Circus, forming "Barnum and Bailey's Greatest Show on Earth". A former editor for the "New World" and "New Yorker" weekly journals, he began his own periodical, "International Magazine", in 1852, the year of this letter.

His magazine rivaled "Harper's Weekly" for a few months before being absorbed by "Harper's". Griswold was a controversial figure in the literary world. A friend - and later archenemy - of Edgar Allan Poe, whom he had met in 1841, Griswold wrote Poe's 1849 obituary in the "New York Tribune". The obituary, which slandered Poe's character likely because Poe had criticized Griswold's work - and had won the affections of Mrs. Frances "Fanny" Sargent Osgood, whom Griswold idolized, resulted in a public outcry from Poe's supporters.

See more listings in our MUSIC & PERFORMERS (2,379). Please note that this is an authentically signed item. We do not sell autograph copies or signature reprints. Images shown may contain our company watermark. The actual document does not contain this watermark.

This item has been authenticated and is accompanied by a Certificate of Authenticity issued by our parent company, Gallery of History, Inc. We financially stand behind our COA. Ask us about our PSA/DNA and JSA authentication guarantee.

Gallery of History is the world's largest dealer of authentic autographs and manuscripts. Our inventory contains documents in all areas of interest including presidents, royalty, military, aviation, religion, business, science, celebrities, sports, music, authors and more. Whether looking to add to your collection, acquire a unique centerpiece for the home or office, or as a truly one-of-a-kind gift for someone special, you'll find it here at HistoryForSale. Founded in 1981, is a long-standing UACC Registered Dealer, #RD110, and is a long-standing member of the Manuscript Society. The Gallery of History is the largest dealer in the world with an available inventory that exceeds 230,000 rare autographs and manuscripts. Preserving historical documents is important to us.

Our unframed items are sent to you either in acid-free archival sleeves or have been encapsulated when noted. The majority of our in-house framed items are encapsulated in acid free sleeves to guard against organic acids, mounted in an acid-free enviroment and are framed behind glass or UF3-AR Plexiglas which blocks out most ultraviolet light.

We warrant to the original purchaser for a period of ten (10) years from the date of the sale the authenticity of any autograph offered by HistoryForSale. Gallery of History is not liable for any other damages, including consequential damages. There are no other warranties of any nature either expressed or implied, including but not limited to the warranties of merchantability and fitness for a particular purpose. This item is in the category "Collectibles\Autographs\Historical". The seller is "historydirect" and is located in this country: US. This item can be shipped worldwide.