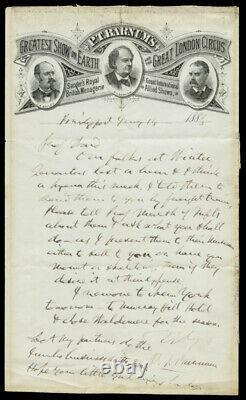 Make an Offer Today and Get a Quick Response! Take a Look at This Week's Specials! BARNUM - AUTOGRAPH LETTER SIGNED 01/14/1883 - HFSID 286033. BARNUM The great showman will send a bear and hyena that died at his circus' winter quarters to his taxidermist to be mounted or "skeletonized" for display at Tufts' Barnum Museum and mentions Jumbo, the giant elephant that the recipient will preserve less than three years later Autograph letter signed: P. On pictorial letterhead of P.

Barnum's Greatest Show on Earth and the Great London Circus" featuring "Sanger's Royal British Menagerie" and "Great International Allied Shows to Professor Henry A. Hutchinson are pictured on the letterhead. In full: Our folks at Winter Quarters lost a bear & I think a hyena this week. Marth of Tufts about them & ask what you shall do - as I present them to their Museum either to sell to you or have you mount or skeletonize them if they desire at their expense.

I remove to New York tomorrow - to Murray Hill Hotel & close Waldemere for the season. " Handwritten postscript: " Let my partners do the Jumbo business with you.

Hope your little girl enjoyed her day. Two years earlier, in 1881, PHINEAS T. Barnum's Greatest Show On Earth, And The Great London Circus, Sanger's Royal British Menagerie and The Grand International Allied Shows United", which soon became known as the "Barnum & London Circus. On May 24, 1883, four months after this letter was written, the Brooklyn Bridge opened, connecting the cities of Brooklyn and New York and Barnum staged one of his greatest promotional coups by walking Jumbo across the bridge to test the strength of the new engineering marvel. WARD of Rochester, New York was Barnum's semi-official taxidermist for rare birds and animals that "died on the job".

In 1883, Ward requested that he be the one to stuff Jumbo when the need occurred. Barnum assented: I shall have my managers understand that if we lose Jumbo which Heaven forbid! You must be telegraphed to immediately, & hope you will lose no time in saving his skin and skeleton.

This is what Barnum is referring to in this letter when he mentions Ward working with his partners. Jumbo's demise came on the evening of September 15, 1885, when the "Greatest Show on Earth" was playing the town of St.

An unscheduled express train hit both Jumbo and the show's smallest elephant, Tom Thumb, breaking Tom Thumb's leg and killing Jumbo. Barnum was having breakfast at the Murray Hill Hotel in New York, mentioned in this letter, when the news was brought to him. He then asked Professor Ward to make two Jumbos, one made of skin, the other a skeleton, to replace the flesh-and-blood original and to have both ready for the 1886 season.

The stuffed Jumbo continued to tour with the circus until 1889, when he was given to TUFTS College in Medford, Massachusetts to be displayed in the Barnum Museum of Natural History, which had been named for its benefactor. Tufts sports teams are called the Jumbos. Jumbo burned in a fire in Barnum Hall in 1975, but his ashes were gathered in a peanut jar, which still serves as a good luck charm for Tufts athletes. WALDEMERE, also mentioned in this letter, was Barnum's mansion (completed in 1869) in Bridgeport, Connecticut, where he spent five months of every year.

Barnum letters mentioning Jumbo are extremely desirable. This letter to his taxidermist is of special historic importance. Lightly creased with folds, not at signature. ¼-inch separations at blank left margin at upper horizontal fold and lower blank edge.

Shaded and lightly soiled at margins from prior framing. Pencil notes (unknown hand) on verso, which is lightly soiled and has tape remnants at upper and lower left margins and lower right blank edge (show through). See more material from these signers. See more listings in our BUSINESS & FINANCE (1,197). Please note that this is an authentically signed item. We do not sell autograph copies or signature reprints. Images shown may contain our company watermark. The actual document does not contain this watermark. This item has been authenticated and is accompanied by a Certificate of Authenticity issued by our parent company, Gallery of History, Inc. We financially stand behind our COA. Ask us about our PSA/DNA and JSA authentication guarantee.

Other listings in these categories. And This Week's Specials. Gallery of History is the world's largest dealer of authentic autographs and manuscripts.

Our inventory contains documents in all areas of interest including presidents, royalty, military, aviation, religion, business, science, celebrities, sports, music, authors and more. Whether looking to add to your collection, acquire a unique centerpiece for the home or office, or as a truly one-of-a-kind gift for someone special, you'll find it here at HistoryForSale. Founded in 1981, is a long-standing UACC Registered Dealer, #RD110, and is a long-standing member of the Manuscript Society.

The Gallery of History is the largest dealer in the world with an available inventory that exceeds 230,000 rare autographs and manuscripts. Preserving historical documents is important to us. Our unframed items are sent to you either in acid-free archival sleeves or have been encapsulated when noted. The majority of our in-house framed items are encapsulated in acid free sleeves to guard against organic acids, mounted in an acid-free enviroment and are framed behind glass or UF3-AR Plexiglas which blocks out most ultraviolet light. We warrant to the original purchaser for a period of ten (10) years from the date of the sale the authenticity of any autograph offered by HistoryForSale. Gallery of History is not liable for any other damages, including consequential damages. There are no other warranties of any nature either expressed or implied, including but not limited to the warranties of merchantability and fitness for a particular purpose. This item is in the category "Collectibles\Autographs\Historical". The seller is "historydirect" and is located in this country: US. This item can be shipped worldwide.