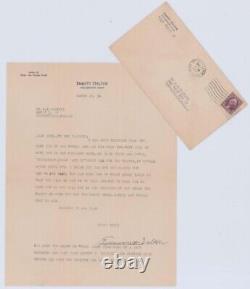 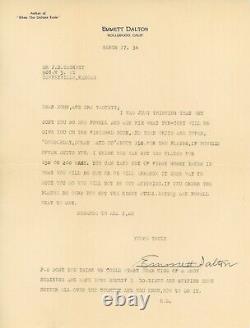 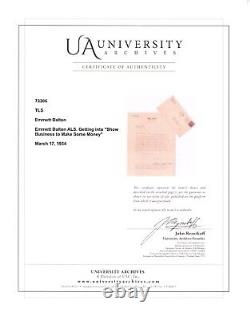 Signed "Emmett Dalton" and addressed to John Tackett, who owned a photography studio in Coffeyville. Tackett would also collaborate with Dalton to write, film, produce and distribute a movie about the famous Coffeyville raid. Signature is dark and bold, with expected folds.

Dalton writes, with numerous spelling and punctuation errors. DEAR JOHN, AND MRS TACKETT. I WAS JUST THINKING THAT WHY DONT YOU GO SEE POWELL AND ASK HIM WHAT PER-CENT WILL HE GIVE YOU ON THE FINISHED BOOK, AND THEN WRITE AND OFFER, "DOUBLEDAY, DORAN AND CO" ABOUT 150. FOR THE PLATES, IF POWELL OFFER SUITS YOU. I THINK YOU CAN GET THE PLATES FOR 150 OR 200 EASY.

IF YOU ORDER THE PLATES BE SURE YOU GET THE RIGHT STULL. BETTER ASK POWEL WHAT TO GET.

TIMES ARE GETTING SOME BETTER ALL OVER THE COUNTRY AND YOU KNOW, HOW TO DO IT. The letter is accompanied by the original envelope which is postmarked "Los Angeles MAR 17 1934", with a canceled Washington 3 cent stamp and the printed address and return address which is listed as Emmett Dalton Hollywood, Calif, 4350 Price St.

Emmett's older brothers briefly worked as US deputy marshals in Indian Territory and shared a position held by their older brother Frank Dalton after he was killed in the line of duty. They hired Emmett to serve as a guard at the jail at Fort Smith, in present-day Arkansas. The elder two started working for the Osage Nation to help them set up a police force but fled after being pursued for stealing horses. Shortly after, they began to conduct robberies of banks, stagecoaches, and trains. Emmett would later join them forming The Dalton Gang.

This item is in the category "Collectibles\Autographs\Historical". The seller is "treasurequest8" and is located in this country: US. This item can be shipped worldwide.