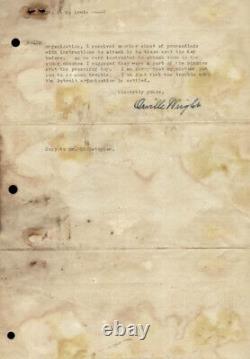 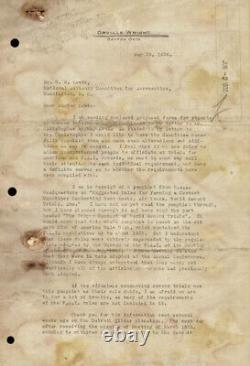 Make an Offer Today and Get a Quick Response! Take a Look at This Week's Specials! ORVILLE WRIGHT - TYPED LETTER SIGNED 05/29/1930 - HFSID 266277. ORVILLE WRIGHT He signs a typed 1930 letter, warning that "we are in for a lot of trouble" if officials at US air competitions keep applying an out-dated set of rules.

In part: I feel that if we are going to allow inexperienced people to officiate at trials for American and F. Records, we must in some way call their attention to each individual requirement, and have a definite answer as to whether the requirements have been complied with. Headquarters on'Suggested Rules for Forming a Contest Committee Conducting Race Meets, Air Tours, World Record Trials, Etc. Regulations up to about 1922. But I understand that those rules were entirely superseded by the regulations adopted by the Bureau of the F. At its meeting of the 5th of January, 1924... Rules are not included in it.... Was the Fédération Aéronautique Internationale.

The committee's mission was to "direct and conduct research and experimentation in aeronautics, with a view to their practical solution". NACA provided policy recommendations on America's aviation system until October 1, 1958 when it was incorporated into the National Aeronautics and Space Administration (NASA), formed largely in response to Soviet space achievements. The major focus of NASA was space research, but aeronautics remained as the first "A" in its name. President Wilson had created NACA in an effort to organize American aeronautical research and raise it to the level of European aviation. ORVILLE WRIGHT was a charter member of NACA's Executive Committee.

Wright concludes that "we are in for a lot of trouble" if the U. Officials conducting record trials use the old rule book. Orville Wright served as a member of NACA until his death in 1948.

See more material from these signers. See more listings in our AVIATION & SPACE (1,116). Please note that this is an authentically signed item.

Take a look at over. Other listings in these categories. And This Week's Specials. Gallery of History is the world's largest dealer of authentic autographs and manuscripts. Our inventory contains documents in all areas of interest including presidents, royalty, military, aviation, religion, business, science, celebrities, sports, music, authors and more. Whether looking to add to your collection, acquire a unique centerpiece for the home or office, or as a truly one-of-a-kind gift for someone special, you'll find it here at HistoryForSale. Founded in 1981, is a long-standing UACC Registered Dealer, #RD110, and is a long-standing member of the Manuscript Society. The Gallery of History is the largest dealer in the world with an available inventory that exceeds 230,000 rare autographs and manuscripts. Preserving historical documents is important to us. Our unframed items are sent to you either in acid-free archival sleeves or have been encapsulated when noted.

The majority of our in-house framed items are encapsulated in acid free sleeves to guard against organic acids, mounted in an acid-free enviroment and are framed behind glass or UF3-AR Plexiglas which blocks out most ultraviolet light. We warrant to the original purchaser for a period of ten (10) years from the date of the sale the authenticity of any autograph offered by HistoryForSale. Gallery of History is not liable for any other damages, including consequential damages. There are no other warranties of any nature either expressed or implied, including but not limited to the warranties of merchantability and fitness for a particular purpose. This item is in the category "Collectibles\Autographs\Historical".