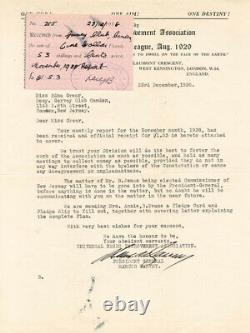 Make an Offer Today and Get a Quick Response! Take a Look at This Week's Specials! MARCUS GARVEY - TYPED LETTER SIGNED 12/23/1938 - HFSID 178370. TLS: " Marcus M Garvey ", 1p, 8¼x11. London, England, 1938 December 23. On letterhead of the Universal Negro Improvement Association and African Communities League to Miss Edna Grear, Secy. Garvey Club Camden, Camden, New Jersey. Jones being elected Commissioner of New Jersey will have to be gone into by the President-General, before anything is done in the matter, but no doubt he will be communicating with you on the matter in the near future. Evans a Pledge Card and Pledge Slip to fill out, together with covering letter explaining the complete Plan. With very best wishes for your success. Affixed at upper left corner is 3½x2½ pink receipt slip filled out in another hand. Called the "Father of Negro Nationalism", Garvey signed this letter just three years after moving the Universal Negro Improvement Association from Jamaica to London in an attempt to revitalize his organization. A proponent of Black pride and racial separation, he had founded the UNIA in his native Jamaica. To unite American Blacks and raise the funds needed for his proposed exodus to Africa, he moved to New York in 191 6. During the UNIA's first international convention at Harlem's Liberty Hall in 1920, the "Black Moses" gained great popularity as a result of his remarkable speeches embracing the uniqueness of the Black heritage.

He claimed some two million followers during his "Harlem Renaissance" and established several businesses to assist his people. One of his enterprises, a steamship company called the Black Star Line, resulted in his downfall. President Calvin Coolidge commuted the sentence two years later, but Garvey was immediately deported to Jamaica.

He severed his ties with the American branches, and renamed his organization the Parent Body of the Universal Negro Improvement Association, the title used on this letterhead. His efforts in London never generated adequate support, and he died there two years after signing this letter.

Folds, vertical fold touches the upper loop of the "G" and the "ar" of Garvey. ½-inch separation at blank left margin at mid-horizontal fold, ½-inch separation at upper blank margin at vertical fold. Ink is smudged at 5 words of receipt, transference at lower blank margin of letter. See more material from these signers. See more listings in our RELIGION & HUMANITARIANS (550).

Please note that this is an authentically signed item. We do not sell autograph copies or signature reprints. Images shown may contain our company watermark. The actual document does not contain this watermark. This item has been authenticated and is accompanied by a Certificate of Authenticity issued by our parent company, Gallery of History, Inc.

We financially stand behind our COA. Ask us about our PSA/DNA and JSA authentication guarantee.

Other listings in these categories. And This Week's Specials. Gallery of History is the world's largest dealer of authentic autographs and manuscripts. Our inventory contains documents in all areas of interest including presidents, royalty, military, aviation, religion, business, science, celebrities, sports, music, authors and more.

Whether looking to add to your collection, acquire a unique centerpiece for the home or office, or as a truly one-of-a-kind gift for someone special, you'll find it here at HistoryForSale. Founded in 1981, is a long-standing UACC Registered Dealer, #RD110, and is a long-standing member of the Manuscript Society.

The Gallery of History is the largest dealer in the world with an available inventory that exceeds 230,000 rare autographs and manuscripts. Preserving historical documents is important to us. Our unframed items are sent to you either in acid-free archival sleeves or have been encapsulated when noted. The majority of our in-house framed items are encapsulated in acid free sleeves to guard against organic acids, mounted in an acid-free enviroment and are framed behind glass or UF3-AR Plexiglas which blocks out most ultraviolet light. We warrant to the original purchaser for a period of ten (10) years from the date of the sale the authenticity of any autograph offered by HistoryForSale. Gallery of History is not liable for any other damages, including consequential damages. There are no other warranties of any nature either expressed or implied, including but not limited to the warranties of merchantability and fitness for a particular purpose. This item is in the category "Collectibles\Autographs\Historical". The seller is "historydirect" and is located in this country: US.