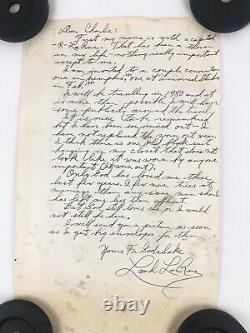 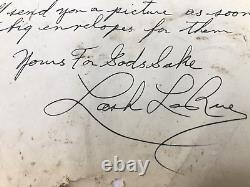 "Dear Charlie", in partial: First my name is with a capitol R LaRue. That has been a thorn in my life-nothing really important except to me......... Dates in text indicated written around or prior to 1980. He had small roles in Eddie Dean westerns at PRC studios in the early 1940s. Billed as "Lash" in honor of his skill with a 15-foot bullwhip, the actor played a black-clad do-gooder named Cheyenne, while his comic sidekick was Al "Fuzzy" St.

In 1951, he headlined the 15-minute TV series Lash of the West, in which he would introduce and narrate clips from his earlier films. This item is in the category "Collectibles\Autographs\Celebrities". The seller is "mojorrific" and is located in this country: US.