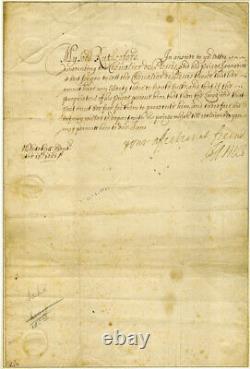 Manuscript Letter signed: "your affectionate friend/James" as Lord High Admiral, 1p, 7 ¾ x11 ½. Whitehall (London), 1661 September 13. Addressed on integral leaf " For the Lord Rutherford/Governor of Dunkirke". In full: In answer to your letter considering the Chevalier de Plessis and his prizes I consider it best for you to let the Chevalier de Plessis know that he cannot have any liberty there to break bulk?

; and that if the proprietors of his prizes pursued him, that then the Laws and that port must be free for them to prosecute him, and therefore his best way will be to depart with his prizes which till reclaimed you may permit him to do. Both of these views brought him into conflict with Parliament, and resulted in the Glorious Revolution of 1688, whereby James was deposed and replaced on the throne by his Protestant daughter Mary and her husband, William III (of Orange). The second son of King Charles I, beheaded by Parliament in 1649 during the English Civil War, James was exiled in France during the Commonwealth era of Oliver Cromwell. With the Restoration of the monarchy (1660), James' elder brother was recognized as King Charles II, and James reclaimed his childhood titles, including Duke of York. James, who had commanded French and Spanish armies during his exile, also resumed and now exercised the office of Lord High Admiral. Royalist forces had commissioned privateers during the English Civil War. Dunkirk would re-enter English history in 1940 for the successful evacuation of the British Army from France in 1940. When Britain seized New Amsterdam from the Dutch in 1664, the city was renamed New York in honor of James. Albany, New York, takes its name from James' Scottish title, Duke of Albany. Lightly creased, with mailing folds. Proper old repairs to edges of address leaf, not affecting any text. See more material from these signers.

KING JAMES II (GREAT BRITAIN). See more listings in our ROYALTY (357). Please note that this is an authentically signed item. We do not sell autograph copies or signature reprints.

Images shown may contain our company watermark. The actual document does not contain this watermark. This item has been authenticated and is accompanied by a Certificate of Authenticity issued by our parent company, Gallery of History, Inc. We financially stand behind our COA. Ask us about our PSA/DNA and JSA authentication guarantee. Our Third & Best Handbook - The One You Want On Historical Documents! For the experienced and novice collector and for those who just love learning history this beautiful 253-page hardcover volume is for you! Take a look at over. Other listings in these categories. And This Week's Specials. Gallery of History is the world's largest dealer of authentic autographs and manuscripts. Our inventory contains documents in all areas of interest including presidents, royalty, military, aviation, religion, business, science, celebrities, sports, music, authors and more. Whether looking to add to your collection, acquire a unique centerpiece for the home or office, or as a truly one-of-a-kind gift for someone special, you'll find it here at HistoryForSale. Founded in 1981, is a long-standing UACC Registered Dealer, #RD110, and is a long-standing member of the Manuscript Society. The Gallery of History is the largest dealer in the world with an available inventory that exceeds 230,000 rare autographs and manuscripts. Preserving historical documents is important to us. Our unframed items are sent to you either in acid-free archival sleeves or have been encapsulated when noted.

The majority of our in-house framed items are encapsulated in acid free sleeves to guard against organic acids, mounted in an acid-free enviroment and are framed behind glass or UF3-AR Plexiglas which blocks out most ultraviolet light. We warrant to the original purchaser for a period of ten (10) years from the date of the sale the authenticity of any autograph offered by HistoryForSale. Gallery of History is not liable for any other damages, including consequential damages. There are no other warranties of any nature either expressed or implied, including but not limited to the warranties of merchantability and fitness for a particular purpose.

This item is in the category "Collectibles\Autographs\Historical". The seller is "historydirect" and is located in this country: US. This item can be shipped worldwide.