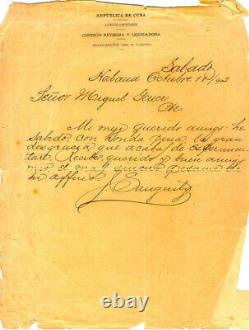 Make an Offer Today and Get a Quick Response! Take a Look at This Week's Specials! MAJOR GENERAL JULIO SANGUILY GARRITE - AUTOGRAPH LETTER SIGNED 10/11/1902 - HFSID 217709. JULIO SANGUILY GARRITE The Cuban-American Major General writes a warm letter to friend Miguel Gener expressing his sympathies for a tragedy occurred Autograph Letter Signed: J. Sanguily in iron gall ink. Fully Translated in English: Habana, October 11, 1902. My very dear friend: It has come to my knowledge with deep sadness, the news of the huge tragedy that you just experienced. Receive, my dear and good friend, my more sincere condolences. On July 20, 1869 he participated as Commandant in the attack to Puerto Principe under the command of Major General Ignacio Agramonte. As Lieutenant Colonel he founded with a small group the Cavalry of Camaguey and on January 1, 1870 he took part in the combat of Minas of Juan Rodriguez (Tana) in Guaimaro, led by Major General Thomas Jordan.

On June 4, 1870 he fought with only 15 horsemen 250 men of infantry and cavalry in San Fernando de Pacheco. That combat was terrible for him because a rifle shot entirely destroyed his left foot.

So, since that time he needed help to mount and disassemble his horse. Shortly after, Major General Federico Fernandez Cavada named him Chief of South Operations of the Camaguey district. On October of that same year he was made prisoner by the enemy but hours later 35 men rescued him under the command of Agramonte. In that epic action he got his right hand injured.

With Gomez, Julio participated in the combats of La Sacra, Palo Seco, the second of Jimaguayu, Naranjo-Mojacasabe and Las Guasimas. In 1872 Julio Sanguily was given the title of Major General by the Chamber of Representatives. He invaded Las Villas in January 1875 and also took part in the combat of San Antonio de Jibaro and in the attack to Sancti Spiritus. On February 28, 1876 he had a brilliant actuation in the Combat of Loma del Jibaro (Cafetal de Gonzalez) and one month later fought along Brigadier General Henry Reeve in La Crimea. By the end of that year the government sent Julio and his brother Colonel Manuel Sanguily to the United States of America so he could rehabilitate from the sequelas of his wounds and collaborate in the preparations of an expedition with the Delegation of Cuba.

However, the Spain ambassador sued them and the American authorities made the insurrects prisoners but when they were negotiating their liberation the Pacto del Zanjon happened. Years later, he came back to Cuba and had an outstanding participation in the frustrated Conspiracion Paz del Manganeso in 1890. During that conspiratorial stage Sanguily Garrite used the pseudonym of " Genef " and due to his singular and controversial attitude it is believed that Jose Marti decided not to tell him the most confidential information of the preparations of the uprising and the one regarding the arrival of the main leaders to Cuba. On February 24, 1895 he was imprisoned by the Spaniards in La Habana and sent to the courts and the trial was made under pressure of the Force of Volunteers who begged for the death penalty. Nevertheless, on November 27, 1895 he was condemned to life in prison but thanks to multiple actions to help him and the intervention of the United States government (he had become an American citizen) Julio was immediately freed with the signed commitment that he would never participate in the war again and two days later he started his trip to the United States in the vessel Mascotte.

Just after arriving to New York he showed up at the Cuban Delegation in order to be register to fight, but the delegate Tomas Estrada Palma, after consulting with the Government Council of Cuba, denied his petition because the violation of his commitment would damage the diplomatic relationships with the United States. However, United States declared war to Spain in February 20, 1898, and Julio was able to travel in the expedition of the vessel Florida under the command of General of Division Jose Lacret Morlot, disembarking in Banes in May of that year. The war ended and during the Republic he stayed away from politics and public positions.

See more listings in our FORIEGN LEADERS (847). Please note that this is an authentically signed item. We do not sell autograph copies or signature reprints. Images shown may contain our company watermark. The actual document does not contain this watermark.

This item has been authenticated and is accompanied by a Certificate of Authenticity issued by our parent company, Gallery of History, Inc. We financially stand behind our COA. Ask us about our PSA/DNA and JSA authentication guarantee. Our Third & Best Handbook - The One You Want On Historical Documents!

For the experienced and novice collector and for those who just love learning history this beautiful 253-page hardcover volume is for you! Take a look at over. Other listings in these categories. And This Week's Specials. Gallery of History is the world's largest dealer of authentic autographs and manuscripts.

Our inventory contains documents in all areas of interest including presidents, royalty, military, aviation, religion, business, science, celebrities, sports, music, authors and more. Whether looking to add to your collection, acquire a unique centerpiece for the home or office, or as a truly one-of-a-kind gift for someone special, you'll find it here at HistoryForSale. Founded in 1981, is a long-standing UACC Registered Dealer, #RD110, and is a long-standing member of the Manuscript Society. The Gallery of History is the largest dealer in the world with an available inventory that exceeds 230,000 rare autographs and manuscripts. Preserving historical documents is important to us.

Our unframed items are sent to you either in acid-free archival sleeves or have been encapsulated when noted. The majority of our in-house framed items are encapsulated in acid free sleeves to guard against organic acids, mounted in an acid-free enviroment and are framed behind glass or UF3-AR Plexiglas which blocks out most ultraviolet light. We warrant to the original purchaser for a period of ten (10) years from the date of the sale the authenticity of any autograph offered by HistoryForSale. Gallery of History is not liable for any other damages, including consequential damages. There are no other warranties of any nature either expressed or implied, including but not limited to the warranties of merchantability and fitness for a particular purpose. This item is in the category "Collectibles\Autographs\Historical". The seller is "historydirect" and is located in this country: US. This item can be shipped worldwide.