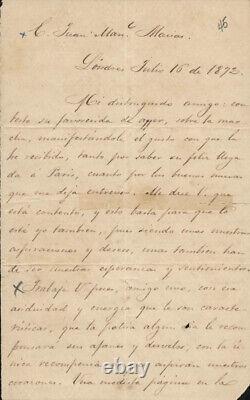 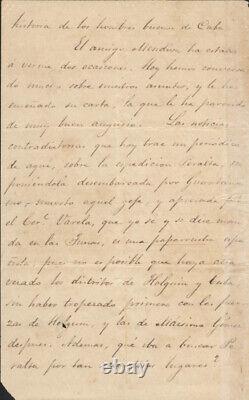 JUAN MANUEL MACIAS The Colonel who fought for the independence of Cuba writes a very important letter to a friend expressing him his happiness for the good path of their movement and telling him not to believe in the contradictory news that the Spanish troops were publishing. He also writes that the only reward wanted by them, the insurrects, was to have a modest page in the history of the good men of Cuba! Autograph Letter Signed: " Juan Manuel Macias " in iron gall ink.

Fully Translated in English: London, July 16, 1872. You tell me you are happy, and that is enough for me to be happy too, and since we have same aspirations and wishes, our hopes and feelings should be the same too. So work, my friend, with that assiduity and energy that characterize you, because the Fatherland will reward your eagerness and sleeplessness someday with the only reward that our hearts aspire to, a modest page in the history of the good men of Cuba.

The friend Mendive has come to see me twice. We have talked a lot about our issues today, and I have showed him your letter, and he considered it a very good augury. The contradictory news in my newspaper today about the Peralta expedition that consider it disembarked in Guantanamo, with its chief dead and imprisoned by Colonel Varela, who I know is said to be the commander in Las Tunas, is a Spanish stupid lie, because it is not possible that it had crossed the districts of Holguin and Cuba without having to face off the forces of Holguin first, and then the ones of Maximo Gomez.

Furthermore, what would Peralta be searching for in such recondite places? Juan Manuel Macias was a revolutionary Colonel who contributed to the independence of Cuba. He is well known for having participated in 1849 in the " Junta Promovedora de los Intereses Politicos de Cuba " (Promoting Assembly of the Political Interests of Cuba), which also included in its leadership General Narciso Lopez and abolitionist novelist Cirilo Villaverde. The Assembly began to work in Washington, New Orleans and New York, but the plan was to land in Cuba, ignite a revolt and then make the petition for annexation. These New York revolutionaries made an alliance with Benjamin Vicuna Mackenna, a representative of the Chilean Government, then at war fighting a Spanish attempt to regain its one time colony. In 1866, Chilean leaders, hoping to open a second front in the Caribbean, authorize Mackenna to tell Macias that Chile would aid a revolution if Cubans took the first step. So, the old dream of getting help from Latin America seemed to come true but Macia's followers couldn't raise more than a few hundred dollars and Chile lost interest after Spanish troops withdrew from its ports on the Pacific.

See more listings in our MILITARY (2,528). Please note that this is an authentically signed item.

Ask us about our PSA/DNA and JSA authentication guarantee. Our Third & Best Handbook - The One You Want On Historical Documents! For the experienced and novice collector and for those who just love learning history this beautiful 253-page hardcover volume is for you! Take a look at over. Other listings in these categories. And This Week's Specials. Gallery of History is the world's largest dealer of authentic autographs and manuscripts. Our inventory contains documents in all areas of interest including presidents, royalty, military, aviation, religion, business, science, celebrities, sports, music, authors and more. Whether looking to add to your collection, acquire a unique centerpiece for the home or office, or as a truly one-of-a-kind gift for someone special, you'll find it here at HistoryForSale. Founded in 1981, is a long-standing UACC Registered Dealer, #RD110, and is a long-standing member of the Manuscript Society.

We warrant to the original purchaser for a period of ten (10) years from the date of the sale the authenticity of any autograph offered by HistoryForSale. Gallery of History is not liable for any other damages, including consequential damages. There are no other warranties of any nature either expressed or implied, including but not limited to the warranties of merchantability and fitness for a particular purpose. This item is in the category "Collectibles\Autographs\Historical".