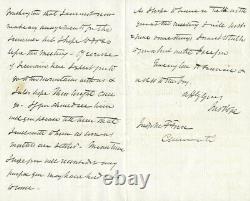 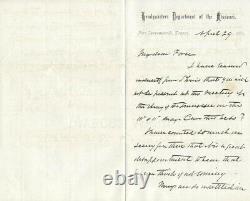 Make an Offer Today and Get a Quick Response! Take a Look at This Week's Specials! GENERAL JOHN POPE - AUTOGRAPH LETTER SIGNED 04/29/1881 - HFSID 286168. JOHN POPE His reputation shredded after an 1879 Board of Inquiry blamed him, not his chosen scapegoat, for the Union military disaster at Second Manassas, Pope presses for an early meeting with his brother-in-law, a judge and Civil War historian.

Autograph Letter signed: "Jno Pope", 3 pages on 2 sheets, 5x8. Fort Leavenworth, Kansas, 1881 April 29. Letterhead "Headquarters Army of the Missouri" to Judge Manning F. I have learned indirectly from someone that you will not be present at the meeting of the Army of the Tennessee on the 10th & 11th May. I have counted so much on seeing you there that it is a great disappointment to hear that you even think of not coming.

Things are so unsettled in Washington that I cannot now make any arrangements for the summer but I hope to do so before the meeting. Of course, if I remain here I expect you to go to the mountains with us and I also hope Ned Wright will go. If you should see him will you please tell him I will write to him as soon as matters are settled. In the meantime I hope you will reconsider any purpose you had not to come.

As I hope to have a talk with you at the meeting I will postpone some things I need to talk to you about until I see you. As Commander of the Army of the Mississippi in the Civil War, he captured New Madrid and took part in the move on Corinth.

These successes in the West brought him the command of the newly organized Army of Virginia (June 1862), and he was named Brigadier General in the regular army. Lee and badly defeated at Second Manassas (August 28-30, also called Second Bull Run), Pope blamed subordinate commander Fitz John Porter for the debacle. Porter was court martialed and dismissed from the army (January 1863), but Pope was relieved of his command in September 1862 and sent to duty on the Western frontier. In 1879, a Board of Inquiry headed by General John Schofield exonerated Porter, blaming Pope for the defeat and concluding that Porter's actions had saved the Union Army from an ever greater defeat.

Hayes, who had just left office when this letter was written. Force would later be awarded the Medal of Honor (1892) for leading an assault on the Confederate defenses of Atlanta, and he wrote extensively on the military history of the Civil War. Though discredited by the Board of Inquiry, Pope was still in military service (a major player in Indian affairs), and must have been eager to enlist the support of his respected friend and in-law. Promoted to Major General in 1882, Pope retired in 1886.

2 horizontal 1 vertical fold crease. See more material from these signers. See more listings in our MILITARY (2,240). Please note that this is an authentically signed item.

We financially stand behind our COA. Ask us about our PSA/DNA and JSA authentication guarantee. Our Third & Best Handbook - The One You Want On Historical Documents! For the experienced and novice collector and for those who just love learning history this beautiful 253-page hardcover volume is for you! Take a look at over. Other listings in these categories. And This Week's Specials.

Gallery of History is the world's largest dealer of authentic autographs and manuscripts. Our inventory contains documents in all areas of interest including presidents, royalty, military, aviation, religion, business, science, celebrities, sports, music, authors and more. Whether looking to add to your collection, acquire a unique centerpiece for the home or office, or as a truly one-of-a-kind gift for someone special, you'll find it here at HistoryForSale.

Founded in 1981, is a long-standing UACC Registered Dealer, #RD110, and is a long-standing member of the Manuscript Society. The Gallery of History is the largest dealer in the world with an available inventory that exceeds 230,000 rare autographs and manuscripts. Preserving historical documents is important to us. Our unframed items are sent to you either in acid-free archival sleeves or have been encapsulated when noted. The majority of our in-house framed items are encapsulated in acid free sleeves to guard against organic acids, mounted in an acid-free enviroment and are framed behind glass or UF3-AR Plexiglas which blocks out most ultraviolet light.

We warrant to the original purchaser for a period of ten (10) years from the date of the sale the authenticity of any autograph offered by HistoryForSale. Gallery of History is not liable for any other damages, including consequential damages. There are no other warranties of any nature either expressed or implied, including but not limited to the warranties of merchantability and fitness for a particular purpose. This item is in the category "Collectibles\Autographs\Historical".