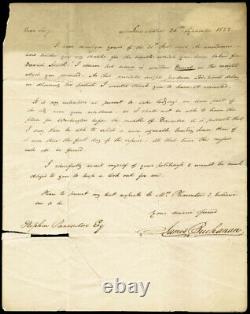 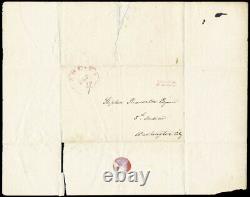 Make an Offer Today and Get a Quick Response! Take a Look at This Week's Specials! PRESIDENT JAMES BUCHANAN - AUTOGRAPH LETTER SIGNED 09/26/1822 - HFSID 5235. JAMES BUCHANAN Three years after the death (and rumored suicide) the woman who had broken off her engagement to him, Buchanan - newly elected to Congress - writes about finding a residence in Washington. Buchanan never married, and lived for 15 years with Alabama Senator Rufus King. Some modern scholars argue that Buchanan was America's first gay President. Autograph Letter Signed: "James Buchanan" as Congressman, 1p, 7¾x9¾.

In his first term in Congress, 31-year-old Buchanan writes to Stephen Pleasanton Esq. After thanking Pleasanton for his help in obtaining a patent for David Smith, whose name was incorrectly written "Daniel" on the receipt, Buchanan continues: It is my intention at present to take lodgings in some part of the city near your residence. As I shall not be able to leave this place for Washington before the middle of December it is probable that I may then be able to select a more agreeable boarding house than if I were there the first day of the Session. At that time the misses will all be formed....

During the summer of 1819, the 28-year-old lawyer courted 23-year-old Anne Coleman of Lancaster and they planned to wed, but they quarreled and Anne abruptly broke off the engagement. She died suddenly in December. It was known that her father blamed Buchanan for her death, and refused to allow his attendance at her funeral; there were rumors of suicide by overdose. Buchanan always professed his love for Anne Coleman, and never married. Buchanan was sworn in as Congressman in 1821 and wrote this letter in 1822, when he had decided to move to Washington, D.

Rather than commute from Lancaster. For 15 years, he lived in Washington with Alabama Senator Rufus King (elected as Pierce's VP, but deceased shortly after the election).

Andrew Jackson called Buchanan and King "Miss Nancy and Aunt Fancy, " while another contemporary called them Mr. " In a 2012 essay, sociologist Jim Loewen wrote, "There can be no doubt that James Buchanan was gay, before, during, and after his four years in the White House. Moreover, the nation knew it, too - he was not far into the closet. Others dispute this claim, arguing that the flowery language of intimacy was often used to describe male friendships in the 19th century. 2¼-inch horizontal tear at lower blank left. 4-inch vertical tear at fold touches some text (all intact). 7½x1½-inch shading at upper margin touches text.

Integral leaf, creased with above tears only in blank areas. See more material from these signers. See more listings in our PRESIDENTIAL (1,880).

Please note that this is an authentically signed item. We do not sell autograph copies or signature reprints. Images shown may contain our company watermark. The actual document does not contain this watermark.

Take a look at over. Other listings in these categories. And This Week's Specials. Gallery of History is the world's largest dealer of authentic autographs and manuscripts.

Our inventory contains documents in all areas of interest including presidents, royalty, military, aviation, religion, business, science, celebrities, sports, music, authors and more. Whether looking to add to your collection, acquire a unique centerpiece for the home or office, or as a truly one-of-a-kind gift for someone special, you'll find it here at HistoryForSale. Founded in 1981, is a long-standing UACC Registered Dealer, #RD110, and is a long-standing member of the Manuscript Society. The Gallery of History is the largest dealer in the world with an available inventory that exceeds 230,000 rare autographs and manuscripts. Preserving historical documents is important to us. Our unframed items are sent to you either in acid-free archival sleeves or have been encapsulated when noted.

The majority of our in-house framed items are encapsulated in acid free sleeves to guard against organic acids, mounted in an acid-free enviroment and are framed behind glass or UF3-AR Plexiglas which blocks out most ultraviolet light. We warrant to the original purchaser for a period of ten (10) years from the date of the sale the authenticity of any autograph offered by HistoryForSale. Gallery of History is not liable for any other damages, including consequential damages. There are no other warranties of any nature either expressed or implied, including but not limited to the warranties of merchantability and fitness for a particular purpose. This item is in the category "Collectibles\Autographs\Political\Presidential".