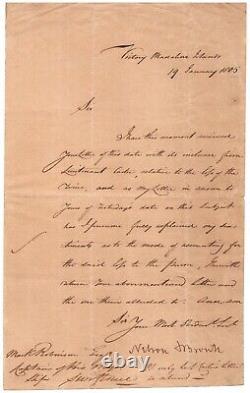 At the Maddalena Islands on January 19, 1805, only nine months before his death at the Battle of Trafalgar. Contains one page, measures 12.25 by 7.75 inches, and in fine condition with toning and minor evidence of mounting on the verso. VICE-ADMIRAL NELSON EXPRESSES CONCERNS OVER THE LOSS OF WINE AND THE ROYAL NAVY BUDGET WHILE SEARCHING FOR THE FRENCH FLEET IN THE MEDITERRANEAN SEA. Vice-Admiral Nelson writes to Mark Robinson, the Captain of. With concerns over the loss of wine and the Royal Navy budget: I have this moment received your Letter of this date with its inclosure from Lieutenant Carter, relative to the loss of the wine, and as my Letter in answer to Yours of Yesterday's date on this Subject has I presume fully explained my sentiments as to the mode of accounting for the said loss to the Purse, herewith return Your aforementioned Letter and the one their alluded to.

After Nelson spent a year and a half enforcing the British blockade of the French fleet off of Toulon, France, the French eluded the blockade and the present letter was created while Nelson pursued and searched for the fleet in the Mediterranean Sea. Participated in the blockade and search and ultimately fought at the Battle of Trafalgar.

This item is in the category "Collectibles\Autographs\Historical". The seller is "grayautographs" and is located in this country: US. This item can be shipped to United States, Canada.