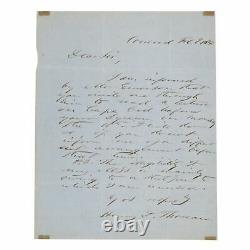 Accepting an invitation from Ralph Waldo Emerson, Thoreau agrees to lecture on his Cape Cod excursions. Fine ALS signed Henry D. Thoreau, one page, 7.75 x 9.75, February 8, 1850. Handwritten letter to Charles Northend, written from Concord. Emerson that you invite me through him to read a lecture on Cape Cod before your Lyceum on Monday the 18th. I will do so if you do not inform me of a different arrangement before that time. On February 6th, Ralph Waldo Emerson had written to Thoreau on behalf of Charles Northend, requesting that he give a lecture on his travels in Cape Cod at the South Danvers Lyceum. In a preface to the lecture, which was a combination of three he had prepared on his Cape Cod sojourns, he excused any apparent disjointedness:'I purpose to read this evening as many extracts as the time will permit from a long account of a visit to Cape Cod made last October, particularly those parts relating two Nauset beach. Thoreau would later compile the stories of these excursions in his 1865 work Cape Cod. With great references to Emerson and his famous Cape Cod trips, this is an ideal handwritten letter by Thoreau. The illustrated article below contains further information regarding the event to which the letter offered here relates and includes an image of the letter offered here. On February 6, 1850, Ralph Waldo Emerson wrote to Thoreau from Saco, Maine to urge him to accept an invitation to deliver his lecture on Cape Cod in South Danvers. Having delivered a two-part talk on his travels on Cape Cod. A few weeks earlier in Concord, Thoreau condensed the two parts into one and read it at the South Danvers Lyceum on February 18, 1850. According to his lecture notes.

You can imagine how unconnected and incomplete this lecture must be. While he was obliged to abbreviate his narrative of his travels on Cape Cod on the lecture circuit, he expanded it over the next several years with an eye toward publication. In 1855, four chapters of what eventually grew into his book-length travelogue appeared in. "[a misspelling of Nauset], and " The Beach.

Thoreau had apparently agreed to contribute additional essays to this series, but due perhaps to differences with the editor, his old friend George William Curtis, about changes made to his work, or to Curtis's fear that the sometimes unflattering portrait that Thoreau drew of people of Cape Cod would offend too many readers, the series ended without notice. Thoreau did indeed upset the residents of Cape Cod, one of whom published an angry letter in the. In August 1855 complaining that the author of the series knew nothing of the region, that he had relied on entirely outdated sources, and that his distorted observations were the product of a bewildered mind. Mitchell, County Map Of The States Of New York, New Hampshire, Vermont, Massachusetts, Rhode Island, and Connecticut. (Philadelphia: 1860), David Rumsey Map Collection.

Was the site of the infamous witch trials. History of the Town of Danvers, from its Early Settlement to the Year 1848. This item is in the category "Books & Magazines\Antiquarian & Collectible". The seller is "sbrizek6x3h" and is located in this country: US. This item can be shipped to United States.