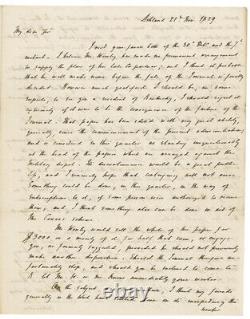 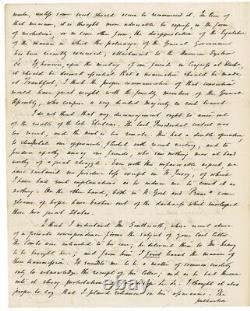 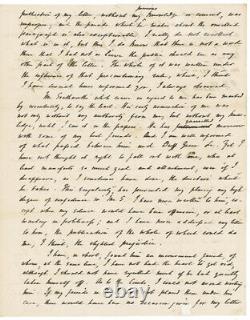 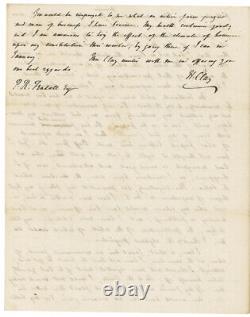 HENRY CLAY Henry Clay wrote this letter from his Ashland estate in Kentucky in 1829, about nine months after he stepped down as President John Quincy Adams' Secretary of State. In it, he talks about President Andrew Jackson - " the Military despot" - as well as the election and a friend who had published a letter of his without his permission. 4 pages, 7¾x9¾, 1 sheet folded, front and verso. Written atClay's Ashland estate in Kentucky, Nov.

You favor both of the 30th. Wonley has made the permanent arrangement to supply the place of his late Co-partner; and I think it probable that he will make none before the fate of the Journal is finally decided. However much gratified I should be, in some respects, to see you a resident of Kentucky, I should regret it extremely if it were to be the consequence of the failure of the Journal. That paper has been edited with very great ability, generally, since the commencement of the present administration; and is considered in this quarter as standing unquestionably at the head of the papers which are arrayed against the Military despot. Its discontinuance would be a great public loss, and I sincerely hope that contingency will not arise.

Something could be done, in this quarter, in the way of Subscriptions to it, if some person were authorized to receive them; and I think some thing also can done to rid of Mr. Should the Journal therefore un-fortunately stop, and should you be inclined to come to K.

Or me know immediately your wishes. On the subject of a nomination, I think my friends generally in the west have settle down on its [illegible] this wonder, unless some event should occur to recommend it. In lieu of that measure, it is thought more advisable to express, in the form of resolutions, in some other form, the disapprobation of the [illegible] of the manner in which the personas of the General Government has been recently exercised, attachment to the American System &c.

If, however, upon the meeting of our friends in Congress at Washn. It should be deemed essential that a nomination should be made at Frankfort, I think the proper communication of that conviction would have great weight with the friendly members of the General Assembly, who compose a very decided majority in each branch. I do not think that any discouragement ought to arrive out of the latest Elections. The last presidential contest was too recent, and the next is too remote. This had a double operation to stimulate our opponents, flushed with recent victory, and to produce apathy among our friends, who saw nothing at hand worthy of a great struggle.

Even with this unfavorable aspect, we have sustained no positive loss except in N. Jersey, of which I have had such explanations as to induce me to count it as nothing. On the other hand, both in N. York and Penna some gleams of hope have broken out of the darkness that enveloped these two states. I think I understand Mr.

Southworth, whose recent abuse of a private correspondence forms the subject of your last letter. The Combs were [illegible] to his case; he delivered them to Mr. [illegible] to be brought here; and from him I first learnt the manner of the transmission. It seemed to me to be a matter of common [illegible] only to acknowledge the receipt of this letter; and as he had thrown into it strong protestations of friendship &c &c. I thought it also proper to say that I placed reliance on his assurances.

The publication of my letter, without my previous knowledge or consent, was improper; and the [illegible] he makes about the omitted paragraph is also exceptionable. I really do not recollect what is in it, but I do know that there is not a work there that I had not as [illegible] the public should see as any other part of the letter. The whole of it was [illegible] under the influence of that precautionary rule, what, I think I have several times informed you, I always observed.

Southworth's whole cause in regard to [illegible] has been marked by eccentricity, to say the least. His early nomination of me was not only without any authority from me, but without my know-ledge, until I saw it in the papers. He has quarrelled [sic] moreover with some of my best friends.

Yet I have not thought it right to fall out with one, who at least manifests so much zeal and attachment, even if I disapprove, as I sometime have done, the [illegible] what be taken. This [illegible], has prevent me placing any [illegible] degree of confident in Mr S. I have never [illegible] to him; ex-cept when my silence would have been offensive, or at least wanting in politeness; and I have never addressed any letter to him, the publication of whole of which could do me, I think, the slightest prejudice. I have, in short, found him an inconvenient friend, of whom, at the same time, I have not had the heart to get rid, although I should not have [illegible] much if he had quietly taken himself off. As to the Combs, I could not [illegible] writing him.

If my friends in R. Had not placed them under his care, there would have been no occasion given for my letter You would be surprised to see what an active farm [illegible] and man of [illegible] I have become. Clay writes with me in offering you our best regards. Clay was Secretary of State under Adams, and this letter was written just nine months after Jackson's inauguration and Clay's stepping down from this post. The enmity between Jackson and Clay reached back at least to 1819, when Clay denounced Jackson's invasion of Florida during the First Seminole War. Adams during less than peaceful circumstances.

One of four Presidential hopefuls in the 1824 election, Clay had fewer electoral votes than Adams, Andrew Jackson or William Crawford and was forced to withdraw. Clay's 37 electoral votes determined the outcome of the election when, on the evening of Jan. 9, 1825, he visited Adams, and they struck a bargain. Adams won the election and the animosity of both Jackson and Crawford, who cried "corrupt bargain". Their charge gained credibility when Clay headed the list of Adams' Cabinet appointments.

Clay also served as U. When Clay died on June 29, 1852, he was sure that his last great work, the Compromise of 1850, had permanently averted a Civil War. Unfortunately, the compromise only delayed the inevitable for a decade.

Letter was not examined outside encapsulation. Lightly toned, foxed and stained. Show-through touches signature and body of letter. Rounded corners, with light discoloration along top corners.

See more material from these signers. See more listings in our U. Please note that this is an authentically signed item.

Ask us about our PSA/DNA and JSA authentication guarantee. Our Third & Best Handbook - The One You Want On Historical Documents! For the experienced and novice collector and for those who just love learning history this beautiful 253-page hardcover volume is for you! Take a look at over. Other listings in these categories. Gallery of History is the world's largest dealer of authentic autographs and manuscripts. Our inventory contains documents in all areas of interest including presidents, royalty, military, aviation, religion, business, science, celebrities, sports, music, authors and more. Whether looking to add to your collection, acquire a unique centerpiece for the home or office, or as a truly one-of-a-kind gift for someone special, you'll find it here at HistoryForSale. Founded in 1981, is a long-standing UACC Registered Dealer, #RD110, and is a long-standing member of the Manuscript Society.

The Gallery of History is the largest dealer in the world with an available inventory that exceeds 230,000 rare autographs and manuscripts. Preserving historical documents is important to us. Our unframed items are sent to you either in acid-free archival sleeves or have been encapsulated when noted.

The majority of our in-house framed items are encapsulated in acid free sleeves to guard against organic acids, mounted in an acid-free enviroment and are framed behind glass or UF3-AR Plexiglas which blocks out most ultraviolet light. We warrant to the original purchaser for a period of ten (10) years from the date of the sale the authenticity of any autograph offered by HistoryForSale. Gallery of History is not liable for any other damages, including consequential damages. There are no other warranties of any nature either expressed or implied, including but not limited to the warranties of merchantability and fitness for a particular purpose. This item is in the category "Collectibles\Autographs\Historical".