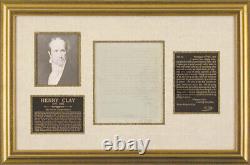 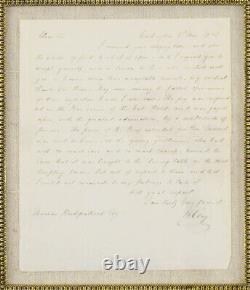 Make an Offer Today and Get a Quick Response! Take a Look at This Week's Specials! HENRY CLAY - AUTOGRAPH LETTER SIGNED 03/04/1850 - HFSID 13383. HENRY CLAY Henry Clay sends an autograph letter as U. Senator of thanks for the letter and food.

Autograph Letter Signed: "Henry Clay" as U. In full: I received your obliging letter, and also the articles of food to which it refers.

And I request you to accept yourself, and to tender to those who united with you in transmitting these acceptable presents, my cordial thanks for them. They were among the fattest specimens of their respective kinds I ever saw. The pig was suspended in the Bar room of the Nat.

Hotel and was gazed upon, with the greatest admiration, by a multitude of persons. The piece of the Beef intended for Govr Seward was sent to him. Tell the young gentleman, who had with so much care and so much success, nursed the Coon that it was brought to the dining table in the most tempting form; but out of respect to them and to it I could not reconcile to my feelings to taste it. He was the unsuccessful presidential candidate of the Democratic-Republican Party in 1824, of the National Republican Party in 1832 and of the Whig Party in 1844.

John Wilkes Booth stayed at the National the day he shot Lincoln. On January 29, 1850, five weeks before this letter was written, Henry Clay offered to the Senate a series of resolutions that he hoped northern and southern senators would agree on. They involved admitting California as a free state with no decision in regard to slavery in the other territory gained from Mexico in the recent war. A strict new fugitive slave law was also proposed. During 1850, Clay held a series of meetings at the hotel between leading northern and southern Congressmen and Senators to work out the Compromise of 1850. So close had the Union been to dissolution that when Congress passed the Compromise on September 7, 1850, a spontaneous celebration broke out in Washington. The Marine Band led a large parade of citizens up the Avenue to the National Hotel to thank Clay, before moving on to the lodgings of the other leaders involved in crafting the Compromise.

Clay later died in room 32 of the National in 1852. Seward had been elected Senator in 1848, but, in this letter, Clay still referred to him as "Governor" Seward.

Seward, an uncompromising opponent of slavery, opposed his friend Clay's compromise resolutions. After Clay died on June 29, 1852 and Daniel Webster passed away on October 24, 1852, Seward became the recognized leader of the Whig Party. Tape stains at upper right blank corner and lower blank margin. Framed in the Gallery of History style: 32x21. See more material from these signers.

See more listings in our U. Please note that this is an authentically signed item.

We financially stand behind our COA. Ask us about our PSA/DNA and JSA authentication guarantee. Our Third & Best Handbook - The One You Want On Historical Documents! For the experienced and novice collector and for those who just love learning history this beautiful 253-page hardcover volume is for you! Take a look at over. Other listings in these categories. And This Week's Specials. Gallery of History is the world's largest dealer of authentic autographs and manuscripts. Our inventory contains documents in all areas of interest including presidents, royalty, military, aviation, religion, business, science, celebrities, sports, music, authors and more. Whether looking to add to your collection, acquire a unique centerpiece for the home or office, or as a truly one-of-a-kind gift for someone special, you'll find it here at HistoryForSale. Founded in 1981, is a long-standing UACC Registered Dealer, #RD110, and is a long-standing member of the Manuscript Society. The Gallery of History is the largest dealer in the world with an available inventory that exceeds 230,000 rare autographs and manuscripts. Preserving historical documents is important to us. Our unframed items are sent to you either in acid-free archival sleeves or have been encapsulated when noted. The majority of our in-house framed items are encapsulated in acid free sleeves to guard against organic acids, mounted in an acid-free enviroment and are framed behind glass or UF3-AR Plexiglas which blocks out most ultraviolet light. We warrant to the original purchaser for a period of ten (10) years from the date of the sale the authenticity of any autograph offered by HistoryForSale. Gallery of History is not liable for any other damages, including consequential damages. There are no other warranties of any nature either expressed or implied, including but not limited to the warranties of merchantability and fitness for a particular purpose. This item is in the category "Collectibles\Autographs\Historical".