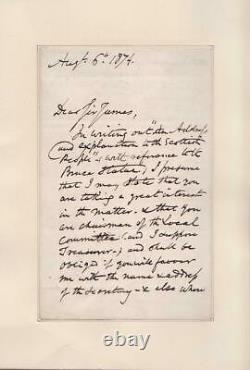 The letter reads as follows;'Augt. Dear Sir James, In writing out "An Address and explanation to the Scottish People"- with reference to the Bruce Statue. I presume that I may state that you are taking a great interest in the matter. & that you are chairman of the Local Committee and I suppose Treasurer; and shall be obliged if you will favor me with the name & address of the Secretary- & also whose subscriptions are to be received and should there not be any place in London for that purpose, I will arrange that matter myself.

Either at my Bankers or elsewhere- and I should further be obliged if you will let me know- who it was that applied for the site on the Esplanade- & and who it was that granted this favor. Or any other particulars you may wish me to mention- An early reply will oblige Dear Sir James- Yours Truly George Cruikshank (signature) Sir James E Alexander C. PS The Secretary will of course send out the circulars - kindly say how many I should forward to him -' In August of 1874 George Cruikshank wrote a phamplet titled, "An address and explanation to the Scottish people by George Cruikshank with respect to the proposed statue in honor of Robert The Bruce". Being of Scottish heritage he proposed a committee, with others, to erect a statue of King Robert The Bruce on the field of Bannockburn, Scotland which celebrated his victory against the English on June 24th, 1314. Although there was a falling out between the committee and Mr.

Cruikshank the statue was unveiled by Sir James on November 24th, 1877. (1838), and by his death had created nearly 10,000 illustrations. Very Good light browning to edges, a few small pencil notations.

View My Other Items For Sale. Get Images that Make Supersized Seem Small.

Get Auctiva's Listing Templates on your items with a few clicks. Attention Sellers - Get Templates Image Hosting, Scheduling at Auctiva.

This item is in the category "Collectibles\Autographs\Historical". The seller is "robsbook" and is located in this country: US. This item can be shipped worldwide.