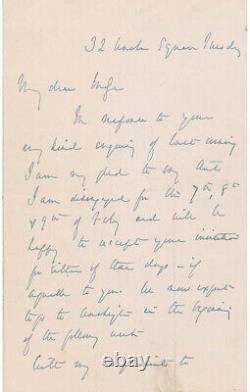 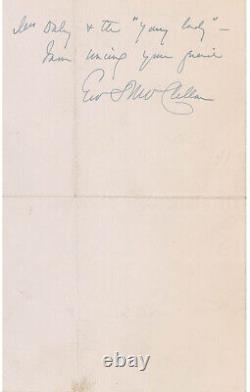 32 Washington Square [New York City], undated, but from the early 1880s. To "My dear Judge" Charles P. We now expect to go to Washington in the beginning of the following week. With my compliments to Mrs.

He directed the Peninsular Campaign and won at Antietam, but was removed by President Lincoln for failure to continue the pressure on Lee's army. No match for Confederate General Robert E. Lee as a field commander, but skilled at logistics and organization, McClellan made a great contribution to eventual Union victory by building the Army of the Potomac into a well trained and disciplined fighting force. In 1864, he was the unsuccessful Democratic candidate for President, losing to Lincoln 233 electoral votes to 21 (although the election was much closer than that until General Sherman captured Atlanta in September). After leaving the governship, McClellan moved to 32 Washington Square in New York City.

He was very active in McClellan's Presidential campaign, and helped to organize a new Democratic Club in the City, the Manhattan Club - called by McClellan "a club for gentlemen" (in contrast to the Tammany Hall Democratic machine). One vertical and one horizontal fold. See more material from these signers. See more listings in our MILITARY (2,350).

Please note that this is an authentically signed item. We do not sell autograph copies or signature reprints. Images shown may contain our company watermark.

The actual document does not contain this watermark. This item has been authenticated and is accompanied by a Certificate of Authenticity issued by our parent company, Gallery of History, Inc. We financially stand behind our COA. Ask us about our PSA/DNA and JSA authentication guarantee. Our Third & Best Handbook - The One You Want On Historical Documents! For the experienced and novice collector and for those who just love learning history this beautiful 253-page hardcover volume is for you! Take a look at over. Other listings in these categories. Gallery of History is the world's largest dealer of authentic autographs and manuscripts. Our inventory contains documents in all areas of interest including presidents, royalty, military, aviation, religion, business, science, celebrities, sports, music, authors and more. Whether looking to add to your collection, acquire a unique centerpiece for the home or office, or as a truly one-of-a-kind gift for someone special, you'll find it here at HistoryForSale. Founded in 1981, is a long-standing UACC Registered Dealer, #RD110, and is a long-standing member of the Manuscript Society. The Gallery of History is the largest dealer in the world with an available inventory that exceeds 230,000 rare autographs and manuscripts. Preserving historical documents is important to us. Our unframed items are sent to you either in acid-free archival sleeves or have been encapsulated when noted. The majority of our in-house framed items are encapsulated in acid free sleeves to guard against organic acids, mounted in an acid-free enviroment and are framed behind glass or UF3-AR Plexiglas which blocks out most ultraviolet light. We warrant to the original purchaser for a period of ten (10) years from the date of the sale the authenticity of any autograph offered by HistoryForSale. Gallery of History is not liable for any other damages, including consequential damages. There are no other warranties of any nature either expressed or implied, including but not limited to the warranties of merchantability and fitness for a particular purpose.

This item is in the category "Collectibles\Autographs\Military". The seller is "historydirect" and is located in this country: US. This item can be shipped worldwide.