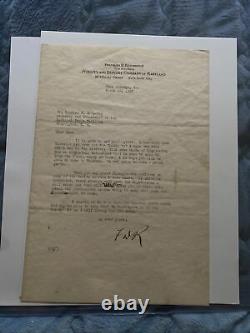 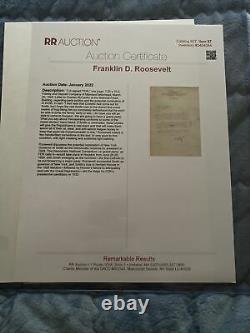 Roosevelt Typed Letter Signed, As Vice President. TLS signed "FDR, " one page, 7.25 x 10.5, Fidelity and Deposit Company of Maryland letterhead, March 20, 1928. Letter to Charles McCarthy at the National Press Building, regarding party politics and the potential nomination of Al Smith. In part: I had read that Costello had come out for Smith, but I hope the real Smith men in the district find some means of hog-tieing him so completely beforehand that he won't be able to jump the fence, early or late.

I do hope you will be able to come to Houston. We are going to have a grand party. What you say about Pennsylvania conforms to some of the inside stories I have heard. Roosevelt makes a few handwritten corrections to the text. In very good to fine condition, with light creasing and scattered light staining.

Roosevelt discusses the potential nomination of New York Governor Al Smith as the Democratic nominee for president in 1928. The Democratic National Convention-a'grand party,' as FDR calls it-would take place in Houston from June 26-28, 1928, with Smith emerging as the nominee-the first Catholic to be put forward by a major party. Roosevelt succeeded Smith as governor of New York, and Smith's loss to Herbert Hoover in the 1928 election-followed by Hoover's failure to adequately deal with the Great Depression-set the stage fro FDR's presidential candidacy in 1932. This item is in the category "Collectibles\Autographs\Political\Presidential".