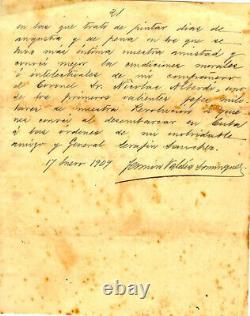 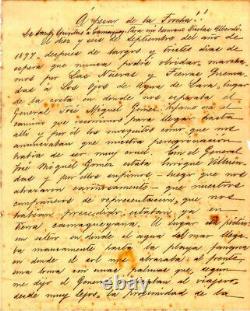 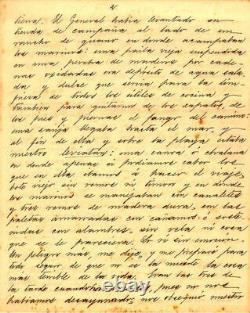 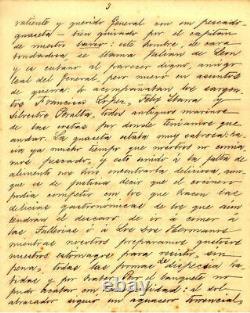 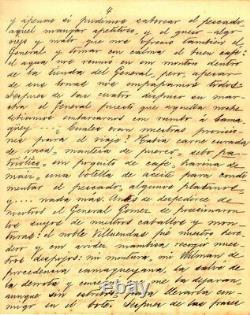 The Colonel and Jose Marti's best friend rewrites in a very long and interesting letter to Nicolas Alberdi some pages of his diary talking about the anguished and sorrowed days as a soldier. Valdés Dominguez has transcribed what he wrote in Camaguey on October 12, 1897.

At its conclusion, from the end of this manuscript. I have copied the foregoing pages as I wrote them at Yaya in Camaguey, on October 12, 1897. These pages from'My Diary as a Soldier' try to describe days of anguish and sorrow, when our friendship got closer and we learned better the moral and intellectual conditions of my friend Colonel Sr. He was one of the first brave military chiefs of our revolution whom I met when I landed in Cuba under the orders of my unforgettable friend General Serafin Sanchez.

There, at a place near the coast, General José Miguel Gomez was waiting for us. Treacherous was the road we took to get there, the mosquitoes alerted us that this was going to be a cruel trip.

General José Miguel Gomez was with Enrique Villuendas waiting for us and they told us-after hugging us-that our fellows of representation, who had preceded us, were already in Camaguey. It was a very sunny day in. Los ojos de agua de Lara' - a poetic place.

An estuary located where the waters of the sea met peacefully the muddy beaches. On the other side was a hill with palm trees, which as I was told by the general, announced the travelers the proximity of land since a very long distance. The general had set up his combat tent close to a guano ranch where the sailors had camped, too....

Both Domingues and Martí, who had met in school, opposed Spanish rule in Cuba, and were convicted of treason while still in their teens. At their trial, each tried to protect the other. Martí was more convincing, received a six-year sentence of hard labor; Valdes received six months. Eventually, both were deported to Spain, where Valdés finished his medical studies and Martí studied law. Valdés assisted Martí in organizing the Revolution of 1895, and, when Martí was killed in the early days of the war.

Valdés went to Cuba, where he served under Generals José Maceo and Maximo Gómez for the duration of the war. As a physician, Valdés was valuable to the Cuban rebels who, in recognition of his services, elected him as one of the army's representatives to the Yaya constitutional convention in 1897. See more material from these signers.

We do not sell autograph copies or signature reprints. Images shown may contain our company watermark.

The actual document does not contain this watermark. This item has been authenticated and is accompanied by a Certificate of Authenticity issued by our parent company, Gallery of History, Inc. We financially stand behind our COA. Ask us about our PSA/DNA and JSA authentication guarantee. Our Third & Best Handbook - The One You Want On Historical Documents!

For the experienced and novice collector and for those who just love learning history this beautiful 253-page hardcover volume is for you! Take a look at over. Other listings in these categories. And This Week's Specials.

Gallery of History is the world's largest dealer of authentic autographs and manuscripts. Our inventory contains documents in all areas of interest including presidents, royalty, military, aviation, religion, business, science, celebrities, sports, music, authors and more. Whether looking to add to your collection, acquire a unique centerpiece for the home or office, or as a truly one-of-a-kind gift for someone special, you'll find it here at HistoryForSale. Founded in 1981, is a long-standing UACC Registered Dealer, #RD110, and is a long-standing member of the Manuscript Society. The Gallery of History is the largest dealer in the world with an available inventory that exceeds 230,000 rare autographs and manuscripts.