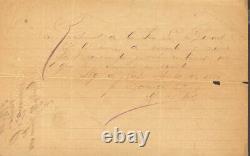 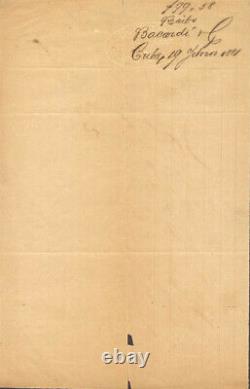 EMILIO BACARDI Y MOREAU The Cuban business-man pens a receipt to some clients of his rum company. Autograph Letter Signed: Bacardi Y. Fully Translated in English: We received from The Bravet and Company the amount of ninety nine pesos fifty eight cents which we have considered to them. However, as the first-born son of his father, he was given a growing and important role in the fledging company and during the 1870s, 80's and 90's his dual identity as a business magnate and subversive political activist grew and was named president of the rum company by his father in 1877. At the same time, Emilio became more and more involved in Cuba's nationalist resistant to the Spanish Empire and as a consequence, he was repeatedly arrested and imprisoned as a suspect of helping the rebels.

The suspicious were well founded, as Emilio used his respectable business activities and connections as a cover for developing a financial network which channeled resources to the rebel guerilla army. Later, the political fortunes of Emilio and his country were extremely altered by the Spanish American War, in which the conquering American army took over administration of the island.

General Leonard Wood, who was the American military governor of Santiago, appointed Emilio Bacardi as mayor of that city and in that position he worked extensively with the American military administration and his relationship with General Wood warmed to the level of friendship, tempered by their complicated political relationship. As mayor, he was generally recognized as a competent and effective manager, succeeding on extending services and practicing good government under the military administration and later the new Cuban Republic.

His honesty and public service reputation distinguished him from many of the would-be leaders who arose in the post-independence political scramble. Bacardi also ran for and won a seat in the National Senate in 1906. 1½ and 1¼-inch separations at center fold.

See more material from these signers. See more listings in our BUSINESS & FINANCE (1,046). Please note that this is an authentically signed item.

Ask us about our PSA/DNA and JSA authentication guarantee. Our Third & Best Handbook - The One You Want On Historical Documents! For the experienced and novice collector and for those who just love learning history this beautiful 253-page hardcover volume is for you!

Take a look at over. Other listings in these categories.

And This Week's Specials. Gallery of History is the world's largest dealer of authentic autographs and manuscripts. Our inventory contains documents in all areas of interest including presidents, royalty, military, aviation, religion, business, science, celebrities, sports, music, authors and more. Whether looking to add to your collection, acquire a unique centerpiece for the home or office, or as a truly one-of-a-kind gift for someone special, you'll find it here at HistoryForSale. Founded in 1981, is a long-standing UACC Registered Dealer, #RD110, and is a long-standing member of the Manuscript Society.

The Gallery of History is the largest dealer in the world with an available inventory that exceeds 230,000 rare autographs and manuscripts. Preserving historical documents is important to us. Our unframed items are sent to you either in acid-free archival sleeves or have been encapsulated when noted.

The majority of our in-house framed items are encapsulated in acid free sleeves to guard against organic acids, mounted in an acid-free enviroment and are framed behind glass or UF3-AR Plexiglas which blocks out most ultraviolet light. We warrant to the original purchaser for a period of ten (10) years from the date of the sale the authenticity of any autograph offered by HistoryForSale.

Gallery of History is not liable for any other damages, including consequential damages. There are no other warranties of any nature either expressed or implied, including but not limited to the warranties of merchantability and fitness for a particular purpose. This item is in the category "Collectibles\Autographs\Historical". The seller is "historydirect" and is located in this country: US.