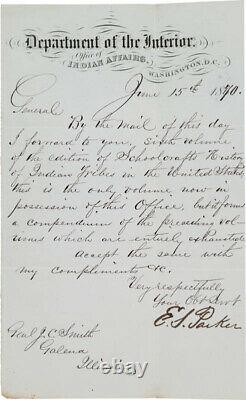 Make an Offer Today and Get a Quick Response! Take a Look at This Week's Specials! PARKER - AUTOGRAPH LETTER SIGNED 06/15/1870 - HFSID 309263. PARKER Handwritten letter by the Seneca sachem and important aide to General and President Grant, forwarding a volume on Indian Tribes in the United States, authored by one of his scholarly friends.

The final draft of Lee's surrender at Appomattox is written in Parker's hand! Parker as Commissioner of Indian Affairs , 1 page, 5x8.

On letterhead of the Office of Indian Affairs, Department of the Interior, to J. This is the only volume now in possession of this Office, but it forms a compendium of the preceding volumes which are entirely exhausted. Very respectfully your obedient servant. In the 1840s, his father's home had become a gathering place for scholars interested in Native American history and culture.

These included anthropologist Lewis Henry Morgan; Western explorer John Wesley Powell; and Henry Rowe Schoolcraft, author of the monumental work cited in this letter. While supervising federal engineering projects in Galena, Illinois, Parker became a close friend of Ulysses S. Initially refused a commission in the US Army during the Civil War because he was not a US citizen - Native Americans were not recognized as such until 1924 - he turned to Grant, he welcomed him to his staff. Parker was present at Appomattox, and drafted the final text of the surrender document signed by Robert E. He was brevetted brigadier general two weeks later.

Parker was the only Native American to achieve the rank of general in the Union Army. Staid Waitie became a Confederate general. Parker remained on Grant's staff after the War, active in negotiating treaties with Native American tribes which had supported the Confederacy. Ruined financially in the Panic of 1873, Parker died in poverty. Edges creased and lightly worn.

See more material from these signers. See more listings in our EXPLORERS & WESTERN AMERICANA (334). Please note that this is an authentically signed item.

This item has been authenticated and is accompanied by a Certificate of Authenticity issued by our parent company, Gallery of History, Inc. We financially stand behind our COA. Ask us about our PSA/DNA and JSA authentication guarantee. Our Third & Best Handbook - The One You Want On Historical Documents!

For the experienced and novice collector and for those who just love learning history this beautiful 253-page hardcover volume is for you! Take a look at over. Other listings in these categories.

And This Week's Specials. Gallery of History is the world's largest dealer of authentic autographs and manuscripts. Our inventory contains documents in all areas of interest including presidents, royalty, military, aviation, religion, business, science, celebrities, sports, music, authors and more. Whether looking to add to your collection, acquire a unique centerpiece for the home or office, or as a truly one-of-a-kind gift for someone special, you'll find it here at HistoryForSale.

Founded in 1981, is a long-standing UACC Registered Dealer, #RD110, and is a long-standing member of the Manuscript Society. The Gallery of History is the largest dealer in the world with an available inventory that exceeds 230,000 rare autographs and manuscripts.

Preserving historical documents is important to us. Our unframed items are sent to you either in acid-free archival sleeves or have been encapsulated when noted. The majority of our in-house framed items are encapsulated in acid free sleeves to guard against organic acids, mounted in an acid-free enviroment and are framed behind glass or UF3-AR Plexiglas which blocks out most ultraviolet light. We warrant to the original purchaser for a period of ten (10) years from the date of the sale the authenticity of any autograph offered by HistoryForSale.

Gallery of History is not liable for any other damages, including consequential damages. There are no other warranties of any nature either expressed or implied, including but not limited to the warranties of merchantability and fitness for a particular purpose. This item is in the category "Collectibles\Autographs\Historical". The seller is "historydirect" and is located in this country: US. This item can be shipped worldwide.