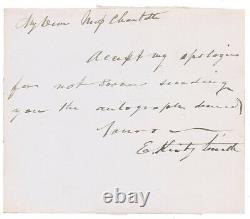 Army in Mexico and Texas and taught at West Point before joining the Confederate cause, was the one of the last Generals to surrender at War's end nearly two months after Lee surrendered at Appomattox, and he was the last surviving full General on either side at the time of his death. Smith, under General Joseph Johnston's Command, was wounded at First Manassas, but he later led a successful push into Kentucky at the Battle of Richmond (1862) and was placed in charge of the Trans-Mississippi Department.

That year, Smith also deployed troops that fought at the Battle of Corinth, in which his brother, Union Lieutenant Colonel Joseph Smith, was mortally wounded. The fall of Vicksburg split the Confederacy in 1863, and isolated Smith's command, which included Texas, Louisiana, Arkansas and Indian Territory, where he initiated industry that helped supply his department with food and provided goods for trade with Europe. Smiths' forces repelled the North's River attack in 1864, the year before his surrender. After taking the Oath of Amnesty following the war, he became president of the Atlantic Telegraph Company and later resumed his academic career as a mathematician.

Adhesive and tape residue on verso, upper and lower edges (show-through at both edges). Horizontal fold 1 from top edge. See more material from these signers.

See more listings in our MILITARY (2,301). Please note that this is an authentically signed item. We do not sell autograph copies or signature reprints. Images shown may contain our company watermark.

The actual document does not contain this watermark. This item has been authenticated and is accompanied by a Certificate of Authenticity issued by our parent company, Gallery of History, Inc. We financially stand behind our COA. Ask us about our PSA/DNA and JSA authentication guarantee.

Our Third & Best Handbook - The One You Want On Historical Documents! For the experienced and novice collector and for those who just love learning history this beautiful 253-page hardcover volume is for you!

Take a look at over. Other listings in these categories. And This Week's Specials. Gallery of History is the world's largest dealer of authentic autographs and manuscripts. Our inventory contains documents in all areas of interest including presidents, royalty, military, aviation, religion, business, science, celebrities, sports, music, authors and more. Whether looking to add to your collection, acquire a unique centerpiece for the home or office, or as a truly one-of-a-kind gift for someone special, you'll find it here at HistoryForSale. Founded in 1981, is a long-standing UACC Registered Dealer, #RD110, and is a long-standing member of the Manuscript Society. The Gallery of History is the largest dealer in the world with an available inventory that exceeds 230,000 rare autographs and manuscripts.

There are no other warranties of any nature either expressed or implied, including but not limited to the warranties of merchantability and fitness for a particular purpose. This item is in the category "Collectibles\Autographs\Historical". The seller is "historydirect" and is located in this country: US.