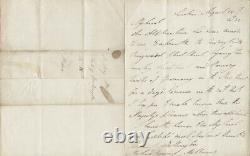 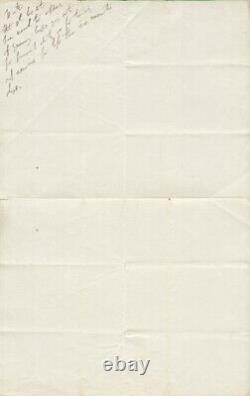 Make an Offer Today and Get a Quick Response! Take a Look at This Week's Specials! DUKE (ARTHUR WELLESLEY) OF WELLINGTON (GREAT BRITIAN) - AUTOGRAPH LETTER SIGNED 08/15/1832 CO-SIGNED BY: PRIME MINISTER WILLIAM (VISCOUNT MELBOURNE II) LAMB (GREAT BRITAIN) - HFSID 78501. DUKE OF WELLINGTON and the 2ND VISCOUNT MELBOURNE. British Prime Minister the Duke of Wellington writes letter discussing Yeomanry troops and asks for King William IV's thoughts, also signed by British Prime Minister the Viscount Melbourne. "My Lord, An Application has been made to me to assess the.

Yeomanry in the New Forest for a day's [illegible] on the 30th. I beg for [illegible] the honour from His Majesty's pleasure with their appreciation. Your Lord's most obedient Humble Servant". Was a British soldier and statesman, and is remembered as one of the most influential figures of the early nineteenth century.

A native of Ireland and a member of the Anglo-Irish Ascendancy (English Protestants who resided in Ireland and held significant influence), Wellesley was commissioned as an ensign (equal to a second lieutenant) in 1787 in Ireland, and served as an aide-de-camp to two successive Lords Lieutenant of Ireland before he was elected as a Member of Parliament in the Irish House of Commons. Elevated to a colonel by 1796.

Wellesley made a name for himself in the Netherlands and in India in the Fourth Anglo-Mysore War's Battle of Seringapatam, after which he was appointed Governor of Seringapatam and Mysore in 1799, as well as promoted to the rank of major-general. After winning a decisive victory over the Martha Confederacy in the Battle of Assaye in 1803. After a victory against the French in the Battle of Vitoria in 1813, he was promoted to the rank of field marshal (one of the highest ranks in an army).

With Napoleon's exile in 1814, Wellesley was granted a dukedom and named ambassador to France. Upon Napoleon's return and the subsequent Hundred Days in 1815, Wellesley (now referred to as the Duke of Wellington).

Commanded the Allied army which, alongside the Prussian army under their own field marshal Blucher, famously defeated Napoleon at the Battle of Waterloo. Wellington's battle record is one of history's most exemplary. And he participated in over sixty battles throughout his military career. His famed adaptive defensive style warfare and extensive planning before battles resulted in several victories against numerically superior forces, and his plans and tactics are still studied throughout the world today.

The Duke of Wellington turned to politics after the Napoleonic Wars, twice serving as. Most famously overseeing the passage of the Catholic Relief Act of 1829. He remained Commander-in-Chief of the British Army until his death.

Was Home Secretary in the Whig government of Earl Grey, a reform-minded administration pursuing electoral reform. He later served as Commissioner of the Treasury and then as. Victoria ascended the throne in 1937, Lord Melbourne became her mentor, almost a father figure. Lamb's personal life was less tranquil.

His wife, Lady Caroline Lamb, had an affair with Lord Byron, and wrote a book about it in 1816. And his own extramarital affair resulted in a lawsuit while he was serving as Prime Minister.

See more listings in our FORIEGN LEADERS (840). Please note that this is an authentically signed item. We do not sell autograph copies or signature reprints. Images shown may contain our company watermark. The actual document does not contain this watermark. This item has been authenticated and is accompanied by a Certificate of Authenticity issued by our parent company, Gallery of History, Inc. We financially stand behind our COA. Ask us about our PSA/DNA and JSA authentication guarantee. Our Third & Best Handbook - The One You Want On Historical Documents! For the experienced and novice collector and for those who just love learning history this beautiful 253-page hardcover volume is for you! Take a look at over. Other listings in these categories. And This Week's Specials. Gallery of History is the world's largest dealer of authentic autographs and manuscripts.

Our inventory contains documents in all areas of interest including presidents, royalty, military, aviation, religion, business, science, celebrities, sports, music, authors and more. Whether looking to add to your collection, acquire a unique centerpiece for the home or office, or as a truly one-of-a-kind gift for someone special, you'll find it here at HistoryForSale.

Founded in 1981, is a long-standing UACC Registered Dealer, #RD110, and is a long-standing member of the Manuscript Society. The Gallery of History is the largest dealer in the world with an available inventory that exceeds 230,000 rare autographs and manuscripts. Preserving historical documents is important to us. Our unframed items are sent to you either in acid-free archival sleeves or have been encapsulated when noted. The majority of our in-house framed items are encapsulated in acid free sleeves to guard against organic acids, mounted in an acid-free enviroment and are framed behind glass or UF3-AR Plexiglas which blocks out most ultraviolet light. We warrant to the original purchaser for a period of ten (10) years from the date of the sale the authenticity of any autograph offered by HistoryForSale. Gallery of History is not liable for any other damages, including consequential damages.