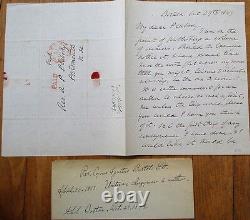 This is a hand-written, signed letter from Unitarian clergyman and author, Reverand Cyrus Augustus Bartol. Dated 1849, it measures about 14" x 8.75" when opened entirely. Generally clean with the original, even folds. Cyrus Augustus Bartol was a Unitarian minister, author, and member of the Transcendental Club.

He graduated from Harvard Divinity School in 1835 and promptly became a Transcendentalist who sought to infuse vitality and Spirit into the Unitarian church and liberate it from unnecessary forms and rituals. His dedication to the primacy of the individual conscience led him in 1867 to meet with a number of radical Unitarians in his home to help establish the Free Religious Association. In the 1880s he lectured on Transcendentalism at Amos Bronson Alcott's Concord School of Philosophy: "The Transcendent Faculties in Man" (1881), "The Nature of Knowledge: Emerson's Way" (1882), and "Emerson's Religion" (1883). He was a prolific writer who contributed articles to the Christian Examiner, the Radical, the Index, the Unitarian Review, and many other magazines. Among his books exploring Transcendentalism are Discourse on the Christian Spirit and Life (1850), Church and Congregation: A Plea for Unity (1858), The Word of the Spirit to the Church (1859), Radical Problems (1872), and The Rising Faith (1874).

As a generally conservative Transcendentalist, Bartol found himself disagreeing with the more extreme positions of Ralph Waldo Emerson and Theodore Parker at the same time as he felt a bond of kinship with them in their common search for a higher religion of Spirit. Between Bartol and Alcott there was mutual and enduring admiration, as both believed in a personal theism. Bartol lauded Alcott in his sermon "Amos Bronson Alcott: His Character" (1888), and Alcott celebrated Bartol as the "Poet of the Pulpit" in his "Sonnet XXI" in Sonnets and Canzonets (1882).

GUARANTEED ORIGINAL - NO REPRODUCTIONS! This item is in the category "Collectibles\Autographs\Historical".

The seller is "gold-coast" and is located in this country: US. This item can be shipped worldwide.