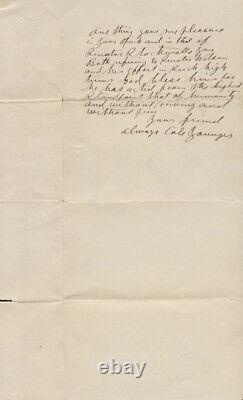 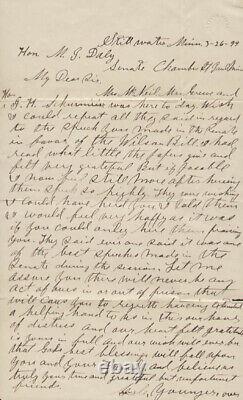 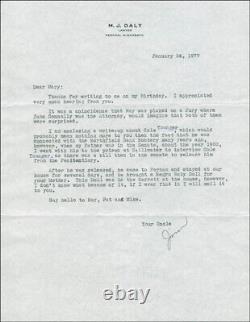 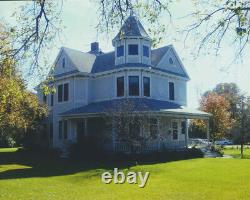 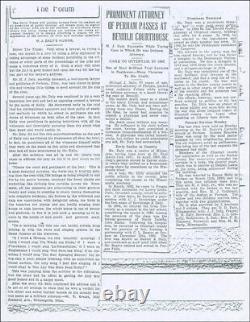 Make an Offer Today and Get a Quick Response! Take a Look at This Week's Specials! COLE YOUNGER - AUTOGRAPH LETTER SIGNED 03/26/1899 - HFSID 293173. COLE YOUNGER Writing from prison in Stillwater, Minnesota, the outlaw thanks a state senator for a speech advocating his release. Autograph Letter signed twice : "Cole Younger", 2 pages, 7½x12¼.

Schurmer was here to day. Wish I could repeat all they said in regard to the speech you made in the Senate in favor of the Wilson Bill. I had read what little the papers give and felt very grateful.

But if posable I would feel still more after hearing them speak so highly. They were wishing I could have herd you. I told them I would feel very happy as it was if you could only here them praising you.

They said everone said it was one of the best speeches made in the Senate during the session. Let me assure you there will never be any act of ours in or out of prison that will caus you to regret having extended a helping hand to us in this our hour of distress and our heart felt gratitude is yours in full and our wish will ever be that Gods best blessings will fal upon you and your Family and believe us truly your ture and greatful but unfortunate friends. One thing gave me pleasure in your speech and that of Senator Stockwalls your both referring to Senator Wilson and his effort in such high terms. Accompanied by original mailing envelope addressed in Younger's hand.

Also accompanied by a typed letter signed by M. Daly, son of the Senator Michael J. Daly to whom Younger was writing, describing visiting Younger in prison in the company of his father, and a visit by Younger to the Daly home in Perham, Minnesota following his release. A photo of the Daly home is also included. Joining the band of William Quantrill, he participated in the bloody raid on Lawrence, Kansas. After the war, Missouri was under Radical Republican governance, and Younger and his three younger brothers became outlaws, first robbing banks in the gang of Archie Clement, and - as other gang members were gradually killed off - becoming leader of the group, along with Frank and Jesse James. In 1873, the James-Younger gang moved on to train robbery. They probably owed their long career to Confederate sympathizers in the area, who sheltered them. On September 7, 1876, they staged a bold daylight raid on a bank in Northfield, Northfield Minnesota, far outside former rebel territory. This raid failed, resulting in a bloody gun battle which claimed the life of one Younger and several other gang members (as well as townspeople). The James brothers escaped to Missouri to continue their life of crime. Three Younger brothers were captured and, after a swift trial, sentence to life in the Stillwater Prison. Bob Younger died in prison (of TB) in 1889. Gradually, however, sentiment developed for the release of Cole and his brother Jim.

Two years after this letter (July 10, 1901), the two surviving brothers were released. Cole Younger then paid a thank you visit to the home of Senator Daly, as described in the accompanying letter from his son. Younger claimed to have repented his sinful ways, and joined the surviving James brother (Frank), in tours of the South which featured lectures and Wild West shows. Notches at right and left edges at folds.

Notches at center of vertical fold. Ink smear at "C" in Cole (legible). See more material from these signers. See more listings in our EXPLORERS & WESTERN AMERICANA (342). Please note that this is an authentically signed item. We do not sell autograph copies or signature reprints. Images shown may contain our company watermark. The actual document does not contain this watermark. This item has been authenticated and is accompanied by a Certificate of Authenticity issued by our parent company, Gallery of History, Inc.

We financially stand behind our COA. Ask us about our PSA/DNA and JSA authentication guarantee. Our Third & Best Handbook - The One You Want On Historical Documents! For the experienced and novice collector and for those who just love learning history this beautiful 253-page hardcover volume is for you!

Take a look at over. Other listings in these categories. And This Week's Specials. Gallery of History is the world's largest dealer of authentic autographs and manuscripts. Our inventory contains documents in all areas of interest including presidents, royalty, military, aviation, religion, business, science, celebrities, sports, music, authors and more. Whether looking to add to your collection, acquire a unique centerpiece for the home or office, or as a truly one-of-a-kind gift for someone special, you'll find it here at HistoryForSale. Founded in 1981, is a long-standing UACC Registered Dealer, #RD110, and is a long-standing member of the Manuscript Society. The Gallery of History is the largest dealer in the world with an available inventory that exceeds 230,000 rare autographs and manuscripts.

There are no other warranties of any nature either expressed or implied, including but not limited to the warranties of merchantability and fitness for a particular purpose. This item is in the category "Collectibles\Autographs\Historical". The seller is "historydirect" and is located in this country: US.