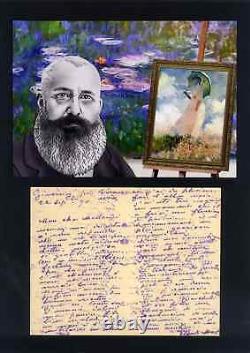 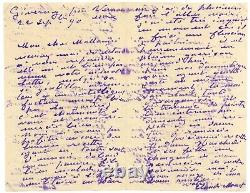 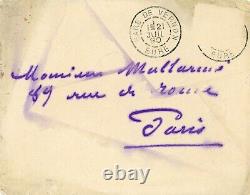 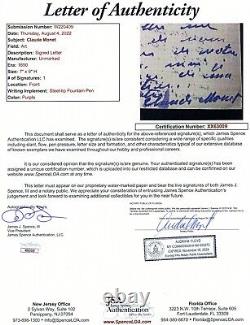 Handwritten and signed letter, two pages (two conjoined sheets), 4.5 x 7 inches, dated July 22, 1890, to Stéphane Mallarmé. Monet writes from his home village of Giverny in Vernon, France. It is here where many of his best works were inspired, such as'Bridge over a Pond of Water Lilies. He writes regarding an interruption in his work due to personal challenges. The letter is written and signed in purple ink. It is mounted (removable) for display with a portrait picture of himself (altogether, 11.75 x 8.25 inches). Regular central horizontal mailing fold and ink stains, as Monet unfortunately folded the sheet before the ink was fully dry. Accompanied by the original mailing envelope addressed in Monet's hand. Translated in parts from French to English. I received your kind letter, despite its conspicuous address (an intelligent postman could have kept it)... We have not yet been able to take advantage of the wonderful recipes as of yet as we've been having all kinds of trouble. First, my poor son has been very ill and was hospitalized for the last month at the military hospital in Le Havre where I visited him several times. I was very worried for a moment because he suffered from an inflammation of the chest.

But fortunately, he is now in full recovery... Because of these things, my house was completely disorganized and my paintings were well interrupted... He was a major French symbolist poet, and his work anticipated and inspired several revolutionary artistic schools of the early 20th century, such as Cubism, Futurism, Dadaism, and Surrealism. This item is in the category "Collectibles\Autographs\Historical".

The seller is "go-gazelle" and is located in this country: US. This item can be shipped to United States, Canada.