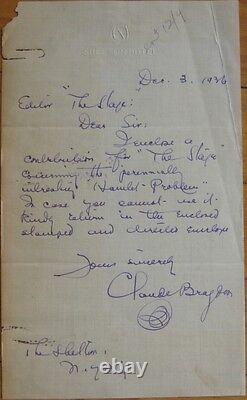 This is an early letter hand-written and signed by Claude Fayette Bragdon, on letterhead from the Shelton Hotel, New York, NY. It measures about 5.75" x 9.5". It has the original, even folds, a corner crease at the top-right, chip missing from the top-left and marks from two paperclips. Claude Fayette Bragdon (August 1, 1866 - 1946) was an American architect, writer, and stage designer based in Rochester, New York, up to World War I, then in New York City. The designer of Rochester's New York Central Railroad terminal (1909-13) and Chamber of Commerce (1915-17), as well as many other public buildings and private residences, Bragdon enjoyed a national reputation as an architect working in the progressive tradition associated with Louis Sullivan and Frank Lloyd Wright.

Along with members of the Prairie School and other regional movements, these architects developed new approaches to the planning, design, and ornamentation of buildings that embraced industrial techniques and building types while reaffirming democratic traditions threatened by the rise of urban mass society. In numerous essays and books, Bragdon argued that only an "organic architecture" based on nature could foster democratic community in industrial capitalist society. GUARANTEED ORIGINAL - NO REPRODUCTIONS! This item is in the category "Collectibles\Autographs\Historical".

The seller is "gold-coast" and is located in this country: US. This item can be shipped worldwide.