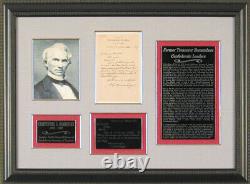 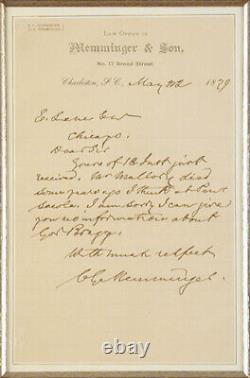 Charleston, South Carolina, 1879 May 22. On letterhead of the Law Office of Memminger & Son to E. In full: Yours of 12 Inst just received. Mr Mallory died some years ago I think at Pensacola. In this letter of May 22, 1879, former Confederate Secretary of Treasury Christopher Gustavus Memminger answered a query about two other Confederate cabinet members. Those in the Davis Administration who remained throughout most or all of the duration of the Confederacy were arrested and charged with treason after the War officially ended on April 9, 1865. Although Memminger had resigned about a year before the War concluded, he was arrested along with the others who still held office, including his successor George A.

Prior to the War, Memminger had acquired a reputation as an impressive financier in his efforts to correct state banking policies and finance public education. This status led Davis to choose him as Secretary of Treasury. During his service, Memminger was concerned with the growing financial strain on the Confederacy due to rising inflation and the ever-increasing need of currency backed by bonds and treasury notes which lacked gold and silver subsidy.

Having started with an empty treasury and the immediate need of financing a war, he faced insurmountable odds. However, the Confederate Congress left him little choice but to issue more and more paper.

As treasury notes depreciated and inflation rose, so too did government costs, necessitating more treasury notes totaling over one-and-a-half billion dollars. Memminger's likeness appeared on eleven bonds issued between August 1861 and February 1863. The Union blockade had prevented the necessary sale of cotton to keep the South's economy afloat. In 1863, Memminger tried to reduce currency with compulsory bond funding; however, Congress delayed his proposals and passed (February 1864) a widely varied version, worsening the Confederacy's finances. A German immigrant boy orphaned in 1807 and raised by future Governor of South Carolina Thomas Bennett, a well-educated Memminger became a lawyer and rose in state politics.

When War loomed, he helped draft the provisional Confederate Constitution. Following the Civil War and a pardon in 1867, Memminger resumed his law practice and public school work in Charleston. A father of eight surviving children, the industrious lawyer also started a chemical - sulfuric acid and phosphates - manufacturing company (1868). Framed in the Gallery of History style: 32½x24. See more material from these signers.

See more listings in our MILITARY (2,325). Please note that this is an authentically signed item. We do not sell autograph copies or signature reprints. Images shown may contain our company watermark. The actual document does not contain this watermark.

This item has been authenticated and is accompanied by a Certificate of Authenticity issued by our parent company, Gallery of History, Inc. We financially stand behind our COA.

Ask us about our PSA/DNA and JSA authentication guarantee. Our Third & Best Handbook - The One You Want On Historical Documents!

For the experienced and novice collector and for those who just love learning history this beautiful 253-page hardcover volume is for you! Take a look at over. Other listings in these categories. Gallery of History is the world's largest dealer of authentic autographs and manuscripts.

Our inventory contains documents in all areas of interest including presidents, royalty, military, aviation, religion, business, science, celebrities, sports, music, authors and more. Whether looking to add to your collection, acquire a unique centerpiece for the home or office, or as a truly one-of-a-kind gift for someone special, you'll find it here at HistoryForSale. Founded in 1981, is a long-standing UACC Registered Dealer, #RD110, and is a long-standing member of the Manuscript Society. The Gallery of History is the largest dealer in the world with an available inventory that exceeds 230,000 rare autographs and manuscripts.

There are no other warranties of any nature either expressed or implied, including but not limited to the warranties of merchantability and fitness for a particular purpose. This item is in the category "Collectibles\Autographs\Historical". The seller is "historydirect" and is located in this country: US. This item can be shipped worldwide.