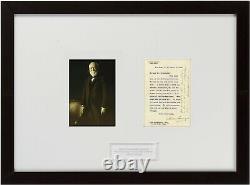 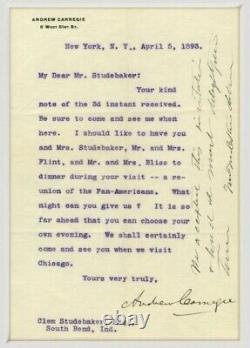 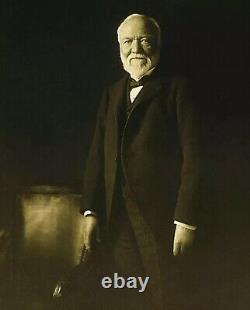 Andrew Carnegie & Clement Studebaker Signed 1893 Letter Mentions founder of IBM. "People who are unable to motivate themselves, must be content with mediocrity".

Andrew Carnegie was a self-made steel tycoon and one of the wealthiest businessmen in history. Born in Scotland November 25, 1835, Andrew Carnegie's first job in 1848 was as a bobbin boy.

As he got older he began working several jobs for the railroads. By 1889 he started Carnegie Steel Corporation, that revolutionized the Steel Business and became the largest of its kind in the world. He began dedicating his time to expanding his philanthropic work, including the establishment of Carnegie-Mellon University in 1904, Carnegie Hall, and numerous libraries.

This EXTREMELY RARE TYPED LETTER DATED April 8, 1893, AND SIGNED BY ANDREW CARNEGIE INVITING CLEMENT STUDEBAKER TO A DINNER REUNION FOR DELEGATES OF THE FIRST PAN AMERICAN CONGRESS OF 1890 WITH AN AUTOGRAPH NOTE SIGNED BY STUDEBAKER ACCEPTING THE INVITATION. Studebaker was the founder of the largest producer of horse-drawn carriages and eventually a maker of Automobiles.

Carnegie invites Studebaker to dinner along with two other delegates, including Charles Flint, founder of the tabulation company that would become IBM, to the first Pan American Congress of 1890. Studebaker also provides a handwritten note accepting the invitation: We accepted this invitation & had a most delightful time.

Mr & Mrs C Studebaker. At the bottom of the letter, Carnegie has beautifully signed his full signature in black ink Andrew Carnegie. This is just an incredible piece of history with these three business magnates all mentioned in this letter with handwritten signatures from both Andrew Carnegie and Clement Studebaker.

Next to the document we've included a beautiful copy photo of Carnegie and below the document and photo we've included one of Andrew Carnegie's most inspiring quotes. "People who are unable to motivate themselves, must be content with mediocrity" -Andrew Carnegie. All of this is beautifully framed in our hand built, contemporary, wide frame, enhanced with professional white matting. As with all of our works, every piece is original.

Only the highest quality materials have been used in the assembly of this item. Sourced from the best manufacturers around the world, we build every frame tailored specifically for the item it will hold.

Protected with 99% UV museum quality glass, and carefully crafted with acid free paper whenever possible. Our premium wood moldings are cut using the newest technology and every single piece is assembled and inspected by our team here in Los Angeles. All autographs have been authenticated by third party experts from the top authenticators in the country, and notarized certificates of authenticity are included in a black leather portfolio. Copies of the original authentications are kept on file with Billionaire Collectibles and can be retrieved by the original purchaser.

We stand 100% behind all of our works of art, and offer a lifetime guarantee on every piece, for as long as you own it. This item is in the category "Collectibles\Autographs\Historical". The seller is "billionairecollectibles" and is located in this country: US.