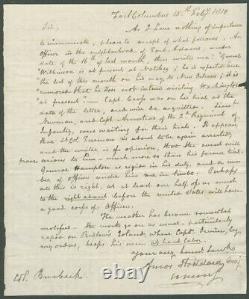 Make an Offer Today and Get a Quick Response! Take a Look at This Week's Specials! AMOS STODDARD - AUTOGRAPH LETTER SIGNED 02/15/1810 - HFSID 283543. AMOS STODDARD Amos Stoddard wrote this letter to Col. Henry Burbeck in 1810 while stationed at Fort Columbus in New York. In it, he discusses the courts-martial of several officers. From the papers of Burbeck, a veteran of key Revolutionary War battles. Autograph letter signed "Amos Stoddard Maj" as Commander of Artillery. Fort Columbus, New York, Feb. In full: Sir, As I have nothing of importance to communicate, plase to accept of what follows.

An officer in the neighborhood of Fort Adams, under date of the 16th of last month, thus writes me:'General Wilkinson is at present at Natchez; he is expected here the last of this month on his way to New Orleans; it is rumored that he does not intend visiting Washington at present'. Cross was on his trial at the date of the letter, and will be acquitted.

Armistead of the 2d Regiment of Infantry, were waiting for their trials. Freeman is about to be again arrested, and the writer is of opinion, that the event will prove serious to him - much more so than his former trial. General Hampton is rigid in his duty, and a num-ber of officers under him are in limbo. Perhaps all this is right, or at least one half of us must to the right about before the united [sic] States will have a good corps of officers. The weather has become somewhat molified [sic] - the works go on as usual-particularly rapid on Bedlow's Island, where Capt- Irvine, by my orders, keeps his men at hard labor. He was chief of the Artillery Corps when he received these orders. Promoted to Brigadier General, he commanded the Connecticut State Militia during the War of 1812.

Commission as Captain of Artillery in 1798. He was promoted to Major in 1807. During a 3-week interval Nov.

20, 1803, Stoddard was Commandant of Upper Louisiana for both France and the United States. He represented both nations at the formal transfer of power ceremony in St Louis on March 9 and 10, 1810. After commanding the artillery at Fort Columbus in New York Harbor, Stoddard was sent West to joint General and future President William Henry Harrison's command in Ohio. Stoddard died on May 11, 1813, from wounds incurred while successfully defending Fort Meigs there from a combined attack by British soldiers and their Native American allies.

Lightly toned, stained, creased and bowed. Paper loss in top right corner and tackhead-sized hole in center of letter, which touch body of letter but not signature.

Please note that this is an authentically signed item. We do not sell autograph copies or signature reprints. Images shown may contain our company watermark. The actual document does not contain this watermark.

This item has been authenticated and is accompanied by a Certificate of Authenticity issued by our parent company, Gallery of History, Inc. We financially stand behind our COA. Ask us about our PSA/DNA and JSA authentication guarantee. Our Third & Best Handbook - The One You Want On Historical Documents! For the experienced and novice collector and for those who just love learning history this beautiful 253-page hardcover volume is for you! Take a look at over. Other listings in these categories. Gallery of History is the world's largest dealer of authentic autographs and manuscripts. Our inventory contains documents in all areas of interest including presidents, royalty, military, aviation, religion, business, science, celebrities, sports, music, authors and more. Whether looking to add to your collection, acquire a unique centerpiece for the home or office, or as a truly one-of-a-kind gift for someone special, you'll find it here at HistoryForSale. Founded in 1981, is a long-standing UACC Registered Dealer, #RD110, and is a long-standing member of the Manuscript Society. The Gallery of History is the largest dealer in the world with an available inventory that exceeds 230,000 rare autographs and manuscripts. Preserving historical documents is important to us.

Our unframed items are sent to you either in acid-free archival sleeves or have been encapsulated when noted. The majority of our in-house framed items are encapsulated in acid free sleeves to guard against organic acids, mounted in an acid-free enviroment and are framed behind glass or UF3-AR Plexiglas which blocks out most ultraviolet light. We warrant to the original purchaser for a period of ten (10) years from the date of the sale the authenticity of any autograph offered by HistoryForSale. Gallery of History is not liable for any other damages, including consequential damages. There are no other warranties of any nature either expressed or implied, including but not limited to the warranties of merchantability and fitness for a particular purpose.

This item is in the category "Collectibles\Autographs\Historical". The seller is "historydirect" and is located in this country: US. This item can be shipped worldwide.