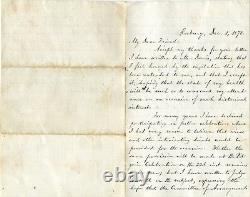 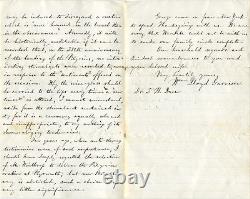 This wonderful letter was written to Garrison's friend, T. Drew, in early December of 1870 - three weeks prior to the Pilgrim Society's Celebration of the 250th anniversary of the landing at Plymouth. Garrison had recently been invited to the Celebration, and he accepted, hoping that my health will be such as to warrant my attendance on an occasion of such historical interest. A decades-long activist and supporter of the temperance movement, Garrison continued, For many years, I have declined participating in festive celebrations where I had every reason to believe that wines and other intoxicating drinks would be provided for the occasion. Whether the same provision will be made at the Pilgrim Celebration on the 22nd inst. Remains to be seen; but I have written to Judge Russell on the subject, expressing the hope that the Committee of Arrangements may be induced to disregard a custom which is more honored in the breach than in the observance. " Assuredly, it will be historically creditable if it can be recorded that, on the 250th anniversary of the landing of the Pilgrims, no intoxicating stimulants were resorted to, even in response to the "sentiments offered on the occasion. Why the wine-glass should be carried to the lips every time a "sentiment" is uttered, I cannot understand, aside from the stimulant contained in it; for it is a ceremony equally absurd and inappropriate, to say nothing of its demoralizing tendencies. Though the most vehement fight of Garrison's career, that against slavery, had ended nearly eight years earlier, it was clearly still a part of his life - he felt the need to point out to Drew that Ten years ago, when anti-slavery testimonies were of such importance, I should have deeply regretted the choice of Mr.

Winthrop former Speaker of the House and Senator Robert C. Winthrop, who did not share Garrison's views on abolition to deliver the Pilgrim Oration at Plymouth; but now that slavery is abolished, such a choice is of very little significance. Garrison closed by recounting that one of his sons had joined them for Thanksgiving, and wished the other had been able to make it.

He wished Drew and his wife well before signing, Very heartily yours, Wm. He helped to found the American Anti-Slavery Society, and is best remembered as the editor of the abolitionist newspaper. Written on three pages of a single sheet of lightly ruled white writing paper in Garrison's neat script. Measures approximately 8" x 10" when unfolded.

Condition : A few short separations at the edges of the folds and scattered light soil. Generally in very good condition and eminently legible. A note about packing: Check our feedback. We take pride in our excellent packing. We double-box all fragile items to insure their safe journey through the postal system.

We do not mark merchandise values below value or mark items as "gifts" - US and International government regulations prohibit such behavior. This item is in the category "Collectibles\Autographs\Historical".

The seller is "dholz" and is located in this country: US. This item can be shipped worldwide.