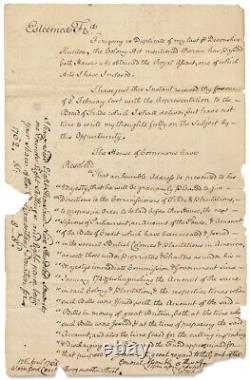 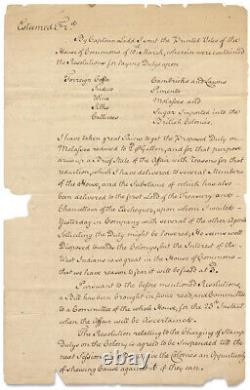 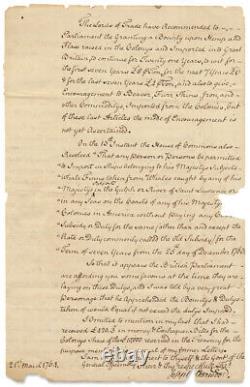 Folio; remnant of wax seal. Leaves separated; some losses at edges and at wax seal, some separations at fold lines, not affecting sense, but affecting both autographs; very good. The slow march to the Stamp Act of 1765. Whaling content is also seen within. Written in two secretarial hands and signed and datelined twice by Sherwood, the letter also transmits a copy of a resolution in the House of Commons concerning "Bills of Credit" for the several British Colonies & Plantations in America.

London attorney and Quaker Joseph Sherwood served as an agent for the colony of Rhode Island from 1759 to 1773. Almost half that time, from 1759 to 1766, he was also an agent representing the colonial interests of New Jersey. The latter two items being important commodities in Rhode Island's economy. I have taken great Pains to get the Proposed Duty on Molasses reduced to 2d [2 shillings] p[er] Gallon, and for that purpose drew up a Brief State of the Affair with reasons for that reduction, which I have delivered to several Members of the House, and the Substance of which has also been delivered to the first Lord of the Treasury and Chancellor of the Exchequer, upon whom I waited Yesterday in Company with several of the other Agents Solliciting the Duty might be lowered; He seems well Disposed towards the Colonys, but the Interest of the West Indians is so great in the House of Commons that we have reason to fear it will be fixed at 3d [3 shillings]. The Resolution relating to the Charging of Stamp Dutys on the Colony is agreed to be suspended till the next Sessions, in order to give the Colonies an Opportunity of showing Cause against it if they can. Sherwood reports that the British Lords of Trade recommended to Parliament that "a Bounty on Hemp and Flax raised in the Colonys and Imported into Great Britain" be granted and continued for 21 years. Of these last Articles the mode of Encouragement is not yet Ascertained. Interestingly, Sherwood writes about another important New England industry Parliament was trying to encourage-whaling. Lawrence or in any Seas on the Coasts of any of his Majesty[s] Colonies in America without paying any Custom Subsidy or Duty for the same.

For the Term of seven years from the 25th day of December 1763. Appended to this first part of the letter is a second part added three weeks later. Therein, Sherwood acknowledges instructions sent by Governor Hopkins and Rhode Island colonial officials.

Although he does not state explicitly what this "Representation to the [British] Board of Trade" concerns, it almost certainly was about issues of taxation on molasses etc. A subject already being attended to (as mentioned above) by him. To this concluding part of his letter Sherwood adds the text of a House of Commons resolution pertaining to "Bills of Credit which have been created & issued in the several British Colonies & Plantations in America as well as those under Proprietors & Charters. " These efforts were likely intended to increase liquidity in the American colonial economy after the French and Indian War. Sinking & Discharging such Bills, and the Fund appropriated for that purpose.

The likely possibility of the the Stamp Act of 1765-which helped to incite revolutionary fervor in America-is clearly seen in Sherwood's letter. Records of the Colony of Rhode Island and Providence Plantations in New England. Volume VI (Providence, 1861), pp378ff.

Also see Morgan and Morgan. The firm of Ian Brabner, Rare Americana, LLC buys and sells rare and antiquarian books, and historical manuscripts, that were published or created in pre-1900 America. We are located in Wilmington, Delaware. Member Antiquarian Booksellers Association of America (ABAA).

International League of Antiquarian Booksellers (ILAB). Guarantee All items are guaranteed to be as described. Authenticity is guaranteed for the lifetime of the original purchaser. As a member of the trade organizations named above, we abide by their published code of ethics. Any item is returnable for any reason within 14 days of receipt (prior notice appreciated).

We will be happy to answer them. Please, no buyers outside of the USA. We leave feedback for buyers once they have posted feedback for us.

Our priority is to make our customers happy and to promptly resolve issues. This item is in the category "Collectibles\Autographs\Historical".

The seller is "americana-rare" and is located in this country: US. This item can be shipped to United States.